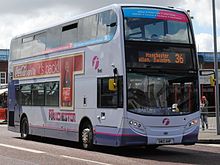 Unite said that bus travellers had halved in Greater Manchester since the industry was deregulated by Margaret Thatcher in the 1980s – many people put off by the pricing structure with the highest  current single fare within the Manchester area a hefty £4.20.

Unite’s lead officer for the bus sector in the north west John Boughton said: “Unite believes that regulation will be good as it will lead to a proper, integrated service and ticketing that would allow travel on buses, trams and even trains.

“Under the mayor’s proposals fares could be capped at £1.50 for a single journey as is the case in London – at present, the highest single fare is £4.20 which is prohibitive for many people, especially those on low incomes.

“Lower fares could herald a renaissance in bus travel as more people travel and this, in turn, could act as a boost to the Greater Manchester economy.

“It would lead to more bus services serving communities that currently don’t have any existing services as there is no profit in them for the private companies. This will give people access to more job opportunities and could stimulate more economic activity.”

However, John Boughton issued a word of warning to Andy Burnham as the mayor aimed to create a world class integrated transport system within Greater Manchester.

John Boughton added: “Andy Burnham should not forget the thousands of Unite members who work within the industry from drivers to engineers and admin staff.

“There needs to be an agreement that the mayor’s proposals to franchise services to bus operators will not be an excuse for those operators to cut transport workers’ pay, and terms and conditions.

“There needs to be an agreement made as to minimum standards, not to mention the thorny issue of pensions.”

Storm Franklin brings chaos to the region with M60 closed at Barton Bridge and...