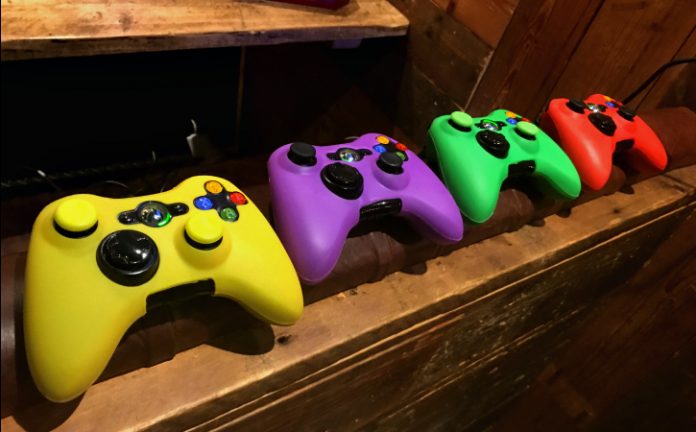 Whether it was the Magnavox Odyssey, the Sega Mega Drive, a Gameboy or a PlayStation – more often than not, video consoles and games were a source of endless fun and hours of entertainment.

As the years have passed by and with technology consistently advancing at warp speed, the gaming industry is worth a whopping £70.5 billion worldwide. With the UK having the 5th largest gaming market, with an estimated 30.4 million UK players, gaming is bigger and better than ever before.

It is exactly this reason why Manchester Gamers Unite takes place each month. If there are so many of us playing games, why not get together and play some more?

Held at Dive Bar in the ever growing and ever trendy Northern Quarter is Manchester Gamers Unite. From what started as a single idea to bring people of the North with the same interest for gaming together, it has since grown to become a social network for keen gamers and game developers alike.

This month marked a special occasion for the coordinators, Steph Staszko and Simran Whitham, marking a whole year since bringing the gamers of the North together through the non-profit organisation.

In true birthday style, the event was complete with balloons, cake, entertainment and crowds of people. Positioned around the corners and booths of Dive Bar were console stations ready to be tried and tested by attendees in friendly competition.

First up we saw Tri-Heart Interactive’s ‘The Otter Man Empire’ before its release. The third person shooter game — meaning you play behind the character as opposed to seeing through their perspective— allows you to journey through space as an otter. With fun graphics, fast paced dynamics and a 4v4 arena based combat, ‘The Otter Man Empire’ is a fun and unique idea that is sure to be hit upon its release.

The artwork that comprises ‘On and Off Again’ is reminiscent of Space Invaders, making the gaming experience nostalgic from start to finish. The different levels, including ‘Invasion’ and ‘Death Match’ see an array of neon stick figures players play side by side to either eradicate the aliens who sit above them, or escape the firing line that awaits. Who needs fancy graphics when you can re-experience the seemingly simple yet strangely addictive games that got you into gaming in the first place.

‘Hero Science’, the first family friendly first person shooter game, highlighted a significant gap in the market for a shooter came that is compatible for ages 7+ without death and violence. Players exist as scientists exploring a galaxy where they stumble upon a planet where robots are unsustainably mining all the planet’s crystals. Defeating the robots means saving the planet. With a drop in and drop out way of playing, the game is compatible for a busy household and lifestyle.

Whilst the Manchester Gamers Unite events host hours of fun for players, each event also offers a friendly networking event with game developers. Many of which are taking part in the Tranzfuser competition taking place in September at EGX in Birmingham with an aim of winning £25,000 for their game.

With free entry, cheap drinks, great people and a friendly, welcoming atmosphere, it comes as no surprise that the events each month are extremely well attended. The events, which are posted on the Manchester Gamers Unite Facebook page, are open to all – whether you’re a game developer, and experienced player or even an amateur. For a completely new and hands on experience, and even re-experiencing the classics we can never forget, Manchester Gamers Unite is an occasion not to be missed.

Egg-cellent Easter offers and events at The Printworks

Roll up Roll up Circus 1903 is coming to town