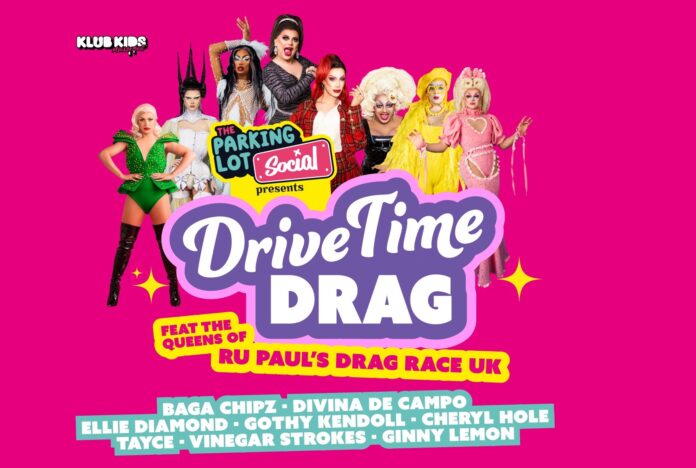 Stars from RuPauls Drag Race UK will be taking to the stage at the AJ Bell Stadium, promising two unmissable nights of live comedy, entertainment and runway worthy looks.

The first of its kind in the UK, the drive-in drag show will also feature a ‘Battle of the Queens’ silent disco, guaranteed to have audiences lip syncing from their car seats.

Josh Kinnersley, Chief Operating Officer at XL Event Lab, said, “Drag Race fever has swept the nation, and we’re delighted to welcome some of the show’s most talented stars to join us for the UK’s first ever drive-in drag show.

We’ve seen a real appetite from the public for all of our Manchester events, and we’ve added an additional DriveTime Drag show to meet demand. All of our drag queens are excited to get back in front of a live audience and have plenty of surprises in store, so we’d urge everyone to get their tickets now to avoid disappointment.”

Car loads can also enjoy a stellar line up of classic films over the three days, including Harry Potter and the Prisoner of Azkaban and The Greatest Showman. For families with younger children, the Social Kids event offers content adapted to a younger, family-oriented audience and an earlier start time.

Also on the bill is The Parking Lot Social Easter Panto. Tailored specially for the drive-in format, the traditional theatre production has had a seasonal makeover – with cast members putting on a special performance of The Wizard of Oz.

Attendees will be entertained in their cars from a vast custom made stage, with shows broadcast across two 60ft screens. Using the best technology, audio will be transmitted from the stage directly to each vehicle through a dedicated FM radio channel.

Safety is at the heart of the event and audiences take part in the immersive, interactive shows from their own cars. It’s a completely contactless event ensuring a safe and socially distant experience, all in accordance with local government guidelines.

Tickets for The Parking Lot Social Easter festival in Manchester are selling fast, with customers advised to purchase soon to avoid disappointment.