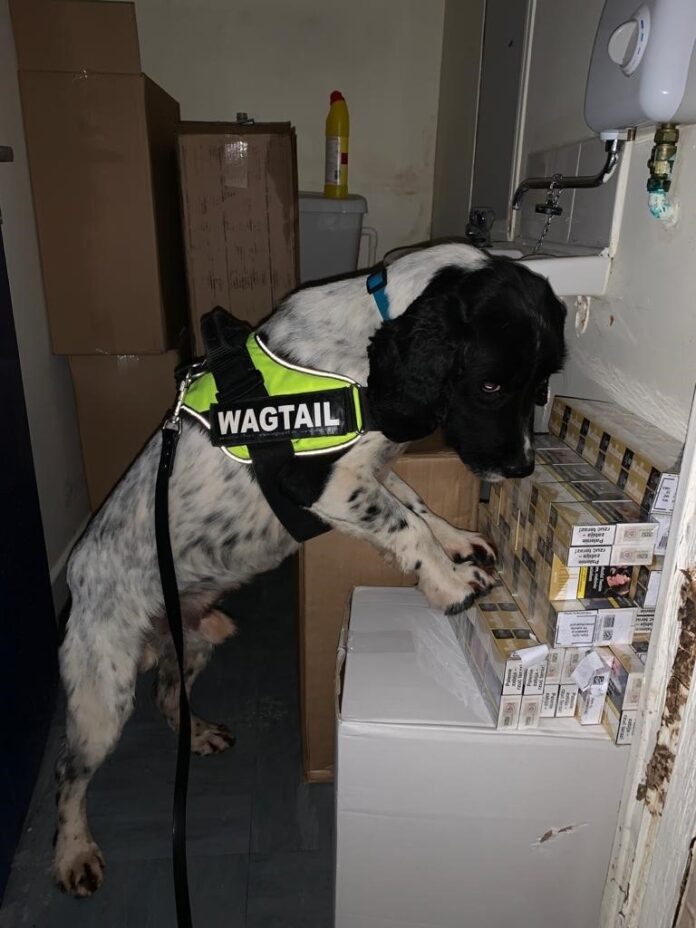 Sniffer dogs have rooted out tens of thousands of illegal cigarettes in a series of raids across Bury.

A warning has now been issued to those selling and buying illegal tobacco that further action is planned.

Specially trained springer dog Birch, provided by Wagtail UK, joined a team from Bury Council’s trading standards and licensing departments and officers from Greater Manchester Police in a day of action on Tuesday.

They uncovered 78,000 illegal cigarettes and 800g of illegal hand rolling tobacco at one shop in Bury– a stash which had been carefully concealed in secret compartments. Another Wagtails dog helped in the seizure of a further 1,000 illegal cigarettes in shops in Prestwich and Radcliffe. The haul is worth a street value of £39,000.

Buyers are reminded of the harm their ‘cheap’ purchases cause to the local community – getting kids hooked on a lethal habit and bringing crime into neighbourhoods.

Angela Lomax, Bury Council’s head of public protection, said: “We visited this shop with Birch after receiving intelligence that illegal tobacco was being sold ‘under the counter’. These detection dogs can find tobacco and cigarettes even when they are hidden in the most unlikely places. We are working with partners across Greater Manchester to drive down the illegal trade and the market is declining but it is still a burden on our communities. If you know where cheap tobacco is being sold, often as ‘duty free’, please get in touch. We will take action wherever and whenever we find illegal tobacco for sale.”

Councillor Jane Black, cabinet member for the cultural economy, added: “This is great work by our teams at the council and the police. Tobacco bought on the illegal market is likely to be the result of organised criminal activity with links to human trafficking, the drugs trade and loan sharks, bringing crime into our communities and exploiting vulnerable people. As well as its links to crime, we know illegal tobacco is how many children start smoking and cheaper prices undermine smokers’ attempts to quit. Further action is planned in the Bury area and we’ll be bringing these fantastic sniffer dogs with us to hunt out these products, no matter how well hidden. The council will also be considering reviewing the licences of the premises caught selling illegal tobacco.”

Andrea Crossfield, Making Smoking History lead at the Greater Manchester Health and Social Care Partnership, said: “Illegal tobacco might seem like a bargain but it comes at a high price to our kids and our communities. Legal or illegal, all tobacco contains a toxic cocktail of chemicals which will kill one in two long-term smokers. Illegal cigarettes are often responsible for getting children started on this lethal addiction, because of their availability at pocket money prices and because dealers don’t care who they sell to. The crackdown on illegal tobacco is part of wider efforts to cut smoking rates and make smoking history for future generations.”