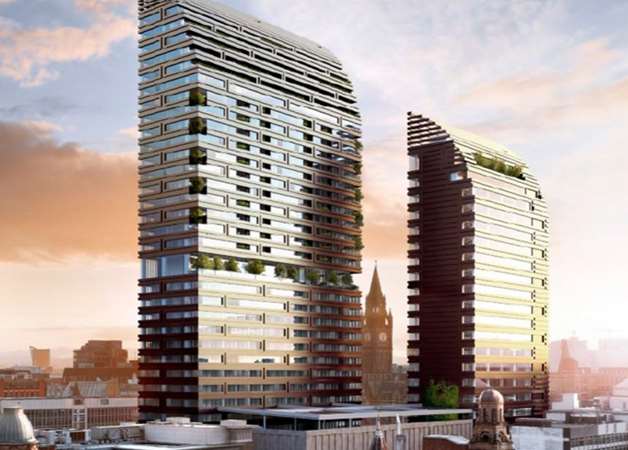 Proposals for two tall buildings in the heart of Manchester would damage the city’s historic core, according to Historic England, which has objected to the development plans in their advice to Manchester City Council today,

This historic area of Manchester deserves a thoughtful scheme which responds to, and doesn’t try to dominate, its surroundings. The development should welcome people and not aggressively push itself into the existing streets, as this proposed development does.

The design, height and colour of the development on Jackson’s Row would dominate the Deansgate/Peter Street conservation area and dwarf the nationally-important Grade II* listed Central Library and Grade I listed Town Hall, which is one of the best in England for its expression of the city’s huge ambition during the Industrial Revolution say Historic England.
3D modelling carried out by the developers as part of the planning application shows how aggressively the proposed buildings would jar against the grand civic buildings which define this part of Manchester.
The development, which is backed by Gary Neville and Ryan Giggs, who recently submitted the plans to Manchester City Council, would also involve the demolition of three unlisted but locally important historic buildings says the report

Catherine Dewar, Historic England Planning Director in the North West said: “We are deeply concerned about how this scheme would affect some of Manchester’s most precious heritage.
It would have an impact on people’s appreciation and experience of the stunning town hall and library but it would also erase different layers of this area’s history, irreparably damaging the special character of the surrounding conservation area.”
She continued: “A dynamic city like ours needs to fully embrace development but this scheme is not good enough to justify the damage it would cause to the streets around the site and to the setting of the city’s most important buildings and spaces.
It threatens Manchester with the loss of historic places that have soul and tell important stories about our city’s past.”

Historic England say that they have worked constructively with Manchester City Council and the developers over the past year and we know this site has potential.
The right scheme here, they add,could create a better environment for those who live and work in Manchester and could bring life back to these streets.
But the proposed scheme would not achieve this. The buildings are focussed inwards onto new, exclusive open spaces that are closed off to the surrounding streets and public realm.
Manchester can accommodate tall buildings, but they need to be well-designed, and in the right places, which calls for a strategic plan.

Six buildings on the shortlist for GM Chamber’s shortlist

The end of the Tib Street Horn?