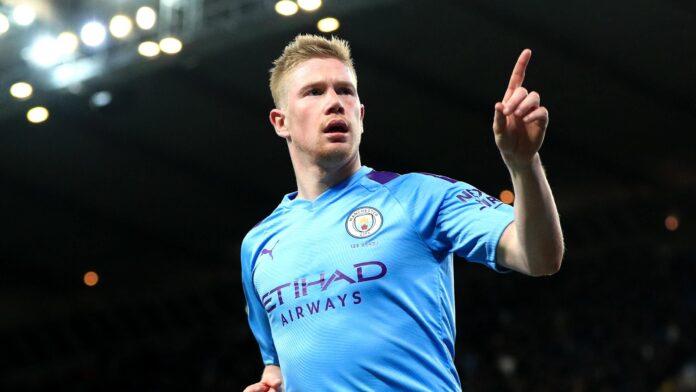 Ahead of Manchester City’s return to Premier League football, the Club has released its latest documentary that shines the spotlight on the career of one of its most decorated players.

Made in Belgium chronicles the newly crowned PFA Player of the Year Kevin De Bruyne’s remarkable career in a new CityTV production and is available to watch on City’s content platform, CITY+.

Featuring extensive archive material and exclusive interviews with Pep Guardiola, Vincent Kompany, Eden Hazard, Roberto Martinez and a host of others, the 70-minute documentary lifts the lid on how the midfielder has become one of the finest players in the world. The new show will explore the experiences which shaped De Bruyne, with first-hand accounts from the family and friends who know him best.

“Much of my talking is done on the pitch but it’s nice to reward the City fans with a little insight into who I am away from it and allow them to get to know me a little better.”

Producing original and never seen before content for City fans is at the heart of the Club’s content strategy, and the documentary marks the latest original production by CityTV. Made in Belgium follows the recent documentaries on the careers of David Silva and Sergio Aguero and the three-part mini-series City Restart, which provided an unparalleled, behind the scenes account of the team’s return to action back in June 2020.

“Great storytelling inspires and uplifts, so we are excited to give our CITY+ members an exceptional insight into one of City’s most loved players and add to our collection of original documentaries.

When we launched our content subscription service in July 2019, we wanted to create a dedicated streaming home for all our City content and provide greater flexibility for fans on how they consumed our content. Since then, we’ve continued to evolve our offering into a truly global, on-demand product. It houses hours of bespoke City content and delivers a unique perspective on the Club and the players, with exclusive behind the scenes access.”

As the new season begins, CITY+ will give fans access to selected live women’s and academy games including this weekend’s Premier League 2 fixture against Derby and the Barclays FA WSL game versus Brighton.

It will also unlock access to full match replays of all men’s and women’s matches 24 hours after the final whistle and original CityTV productions including a brand-new documentary detailing City’s recent search to find its new Head Coach for the women’s team. Fans can sign up to a 30-day free trial, after which CITY+ is just £1.99GBP / month. For more information click here.