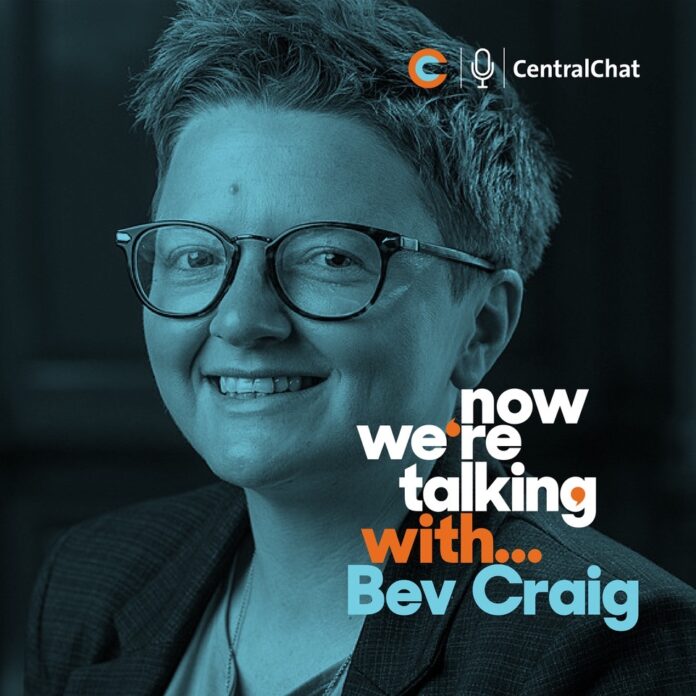 Speaking with Shaun Hinds, CEO of Manchester Central, Manchester City Council Leader Bev shared her thoughts on a range of topics including the regional economy, the strength of the Manchester City Region and why collaboration is important for business growth.

Situated in the heart of Manchester and intrinsic to the region’s business community, Manchester Central attracts over half a million visitors to the city each year, bringing approximately £150m into the Greater Manchester economy in an average year.

In the Central Chat podcast episode, Bev talks about the reputation that the city continues to build. She said: “Manchester’s reputation is really strong and I would begin by saying that that wasn’t by accident. Our economic impact and where we attract lots of exciting and thriving new businesses particularly in digital, creative and tech – that was a concerted effort to market ourselves on that basis where we wanted to create thriving ecosystems that attract people.”

And Bev, the first female Manchester City Council Leader, believes that the reputation will improve further, with the visitor economy playing an increasingly significant part. She added: “If you’re listening from outside of Manchester and you’re thinking about investment opportunities, I would say that we’re definitely one of the best-connected cities outside of the south-east, but we’re ambitious and we want more!

“The role of Manchester Central is vital moving forward, and vital on a number of fronts. It’s important to the economy more broadly, but also to the visitor economy. When people come to Manchester, if you come for a conference or an event, you see how the city is transformed. It really changes people’s perceptions and people choose to come back to Manchester again, either for leisure or to do business.
“In an era where news headlines tell you that cities are over, city centres are dead, Manchester City Centre has been absolutely thriving. It has bounced back really quickly. Keeping our city centre alive and well is also a key role of Manchester Central. It brings people in at different times of the day to do different things as well as that broader local, national, and international conference presence.”
Shaun Hinds, CEO of Manchester Central, added: “A huge amount of business is transacted under our roof when events – of all sizes – are hosted here. The positive impact that we, as a venue, have alongside our key partners in the region is intrinsic to the recovery of our region and this lasts well beyond the events themselves.
“It was refreshing to speak with Bev and to hear how our role as a key partner will help to boost the regional economy by creating jobs, attracting investment and future visitors. I hope listeners find the discussions insightful. We’d love to hear more from people right across the region and beyond about how, together, we can provide a platform for businesses and organisations to thrive.”

Do you know these men? Police want to speak to them about a summer...