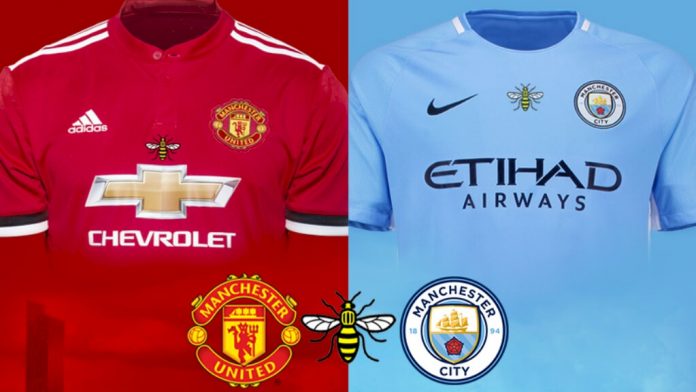 Manchester’s iconic worker bee will feature on the shirts of Manchester City and Manchester United when the two sides meet in pre-season.

The famous symbol will adorn both sets of shirts in Houston on Thursday 20 July, as a mark of respect for those affected by the Manchester terrorist attack in May.

Following the game, which is the first meeting between the two clubs since the attack and the first Manchester derby to be played outside of the UK, both sets of match-worn shirts will be made available for fans to buy via auction.

All proceeds will go to the We Love Manchester Emergency Fund.

“Manchester continues to show great strength and sense of community since May’s devastating attack and the thoughts of everyone at Manchester City remain with those affected,” said City CEO, Ferran Soriano, ahead of next week’s match.

“The worker bee symbolises everything that makes Manchester such a special city and our players will wear it on their shirts with immense pride, as a demonstration of solidarity with the Manchester community.”

Its presence on both shirts comes after the launch of #ACITYUNITED, when both the Blue and Red half of the city came together to pledge a £1 million joint donation to the We Love Manchester Emergency Fund.

The money from the fund will help the families of the 22 people who died in the atrocity and the 64 people who were injured.

“The city of Manchester has shown great strength and unity since the tragic terror attack in May, showing the country and the world how special this city really is,” he added.

“Having the worker bee on our shirts once again shows the community spirit of our city and football club and it is only natural that we continue to help all of those affected, through this fundraising and awareness, with millions of fans across the world watching this game.”

“She is our love and had a big heart”

The North will not be treated like a canary in a coal mine says...