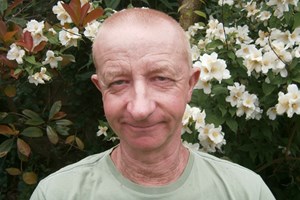 A patient with a fast‑growing lymphatic cancer (non-Hodgkin lymphoma), who had failed to adequately respond to previous cancer treatments, has had a dramatic response to a brand new drug known as ADCT-402 which he is receiving as part of a clinical trial at the Christie in Manchester.

Husband, father and grandfather Michael Prestidge, 59 from Wilmslow, was diagnosed with stage 4 Diffuse Large B cell Lymphoma in May 2015, after suffering from back and stomach pain at night.

He said: “I kept waking up in agony in the middle of the night. I took myself to Accident and Emergency where they first thought it could be a problem with my kidney or gallstones.

“After going back a few times with no improvement I had further investigations  which revealed to my shock that I had  an aggressive non-Hodgkin lymphoma. This was devastating news for me and my family.”

Non-Hodgkin lymphoma is a type of blood cancer that occurs when white blood cells (lymphocytes) that help protect the body from infection and disease, begin behaving abnormally and turn into cancerous cells. When this disease is at Stage 4, this means the lymphoma has spread beyond the lymph nodes to other organs of the body such as the bone marrow or liver.

Following his diagnosis, Michael’s first line of treatment was a course of chemotherapy at his local hospital. After becoming pain free he’d hoped the treatment had been effective, however within 12 months his symptoms started coming back and tests showed that the lymphoma had returned.

Michael recalls: “I started getting night sweats again and could gradually feel the pain coming back.”

In May 2016, Michael was referred to the Lymphoma Unit at The Christie, hoping they might be able to help.

Michael’s consultant, Professor John Radford, said: “Michael has now had a total of six different lines of treatment, four of which have been clinical trials at The Christie.

“It is only on this latest trial of ADCT-402 however that Michael’s tumour has shown such a dramatic response. His first scan performed just 5 weeks after starting the trial shows only very small amounts of remaining disease – a stark contrast to his pre study scan.”

Michael said: “I had a huge tumour in my armpit when I started this trial however after just a couple of weeks, I could feel and see it was shrinking.

“It’s reassuring that I’m having a positive response to this trial and I hope this continues, however I understand how unpredictable this disease can be. I’m hopeful for the future but am taking it one day at a time.”

Professor Radford concluded: “It is very early days and we need to monitor Michael closely to assess how durable this response will be. If the lymphoma continues to respond however we hope he will proceed to stem cell transplantation in the coming months.

“We have a lot of further research to do on ADCT-402 before we can establish how these findings could help more patients like Michael in the future. Cancer is a complex disease and not every patient responds in the same way but the results obtained so far are promising.”

Around 600 clinical trials may be taking place at any one time in The Christie’s National Institute for Health Research Clinical Research Facility, a large, high quality, dedicated clinical research environment where patients can participate in complex and early phase clinical trials.