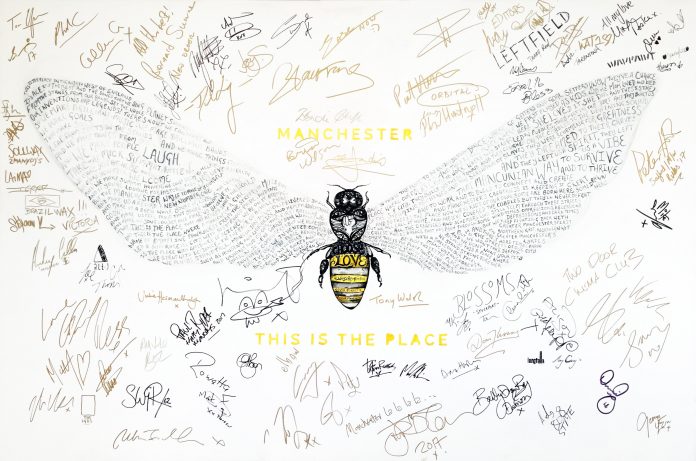 A painting by Manchester artist Amy Coney is due to be auctioned in August, to raise further funds for the We Love Manchester Emergency Fund and Forever Manchester.

The incredible piece was painted live by Amy at a 10-hour event, and features the now-famous words from Tony Walsh’s poem ‘This Is The Place’ embodying the intricate yet strong wings of the iconic Manchester bee.

Anyone interested in this unique piece of art has ten days to bid via eBay, starting on Tuesday 1st August at 6pm, and ending on Thursday 10th August. 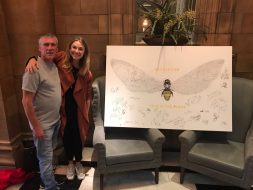 The amazing painting was due to be auctioned off in June, but further interest from even more musicians including Shaun Ryder and the Happy Mondays, Pixies, Blossoms, Nightmares on Wax and Goldfrapp – who have now also signed the painting – meant that the auction was postponed until all interested parties could offer up their autographs.

Amy said: “I can’t believe the support that we have been given by this wonderful city, and so many of its artists, footballers, actors and legends. We now plan to auction the painting off on eBay starting on Tuesday 1st August, giving interested parties just 10 days to bid, and we are hoping that other Manchester legends will be able to sign it before it gets sold.

“We are all just so proud to support this amazing cause, which was set up to help victims of the horrendous events at Manchester Arena on 22 May.”

Prints of the final painting will also be available following the auction, to raise even more funds for Forever Manchester.

Visit the website at http://www.beelovemcr.co.uk/ to find out more about the painting and the link to the auction. The Bee Love shop can be found here: http://amyconey.bigcartel.com/product/bee-