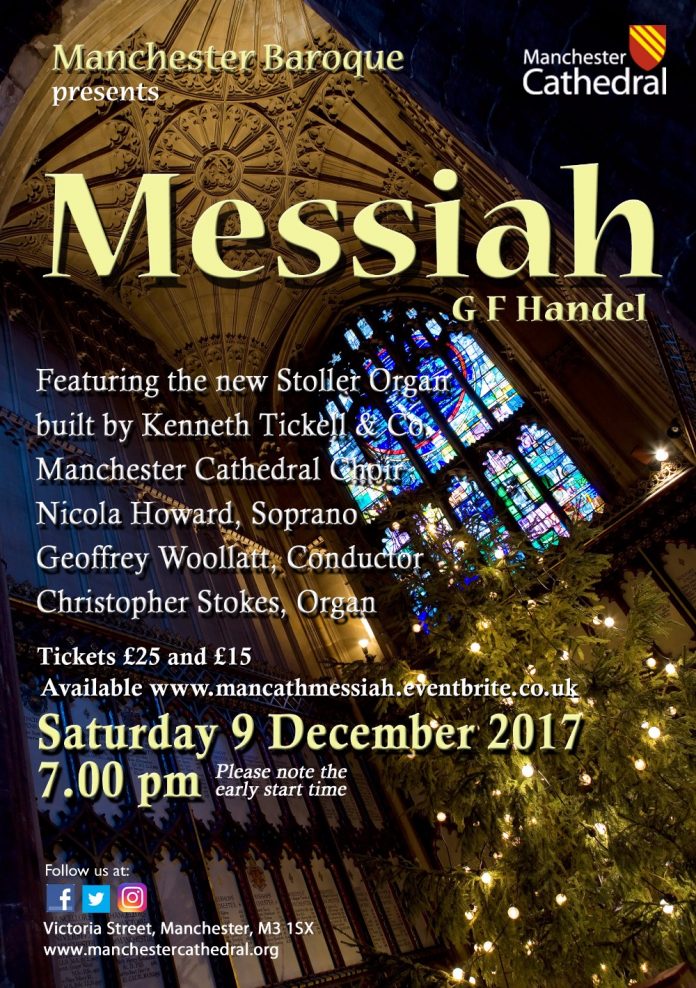 Messiah was composed by German-born English composer George Frideric Handel and premiered in Dublin on April 13, 1742. A large-scale semidramatic work for chorus, soloists, and orchestra, it is the source of the familiar “Hallelujah Chorus.” Messiah is by far the most frequently performed of all oratorios.

The verses used as text for Messiah were assembled by Handel’s friend Charles Jennens, a wealthy supporter of the arts. They were drawn from three parts of the Bible: Old Testament prophesies of the Messiah’s birth; New Testament stories of the birth of Christ, his death, and his resurrection; and verses relating ultimately to Judgment Day, with the final chorus text drawn from the Book of Revelation.

Our performance this year will feature the Cathedral’s new Stoller organ built by Kenneth Tickell & Co, as well as violin, with trumpets and drums from Chetham’s School of Music.

“Handel’s ‘Messiah’ is a wonderful way to prepare for Christmas as we reflect on the story of Christ. I look forward to welcoming you to the Cathedral fore this performance.”

The performance will be conducted by Cathedral Sub-Organist, Geoffrey Woollatt, with Christopher Stokes on the new Stoller organ, built by Kenneth Tickell & Co.

Why not come along and make it part of your Christmas tradition?

Tickets are £25 and £15 and are available from www.mancathmessiah.eventbrite.co.uk