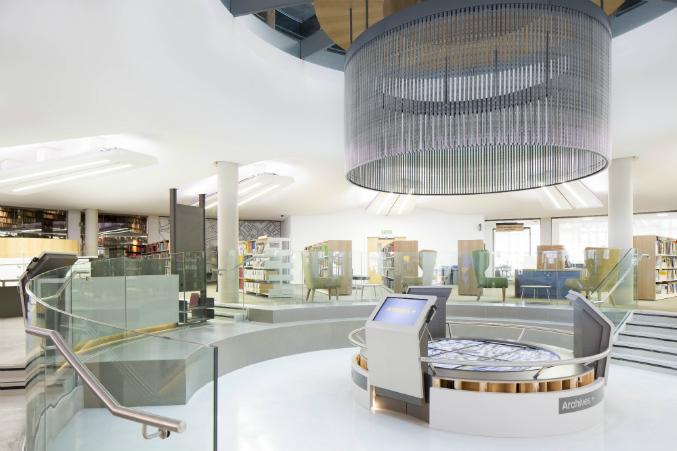 Manchester has announced its bid to join the UNESCO Creative Cities network as a City of Literature.

This prestigious designation would celebrate the city’s unique literary culture and enable partners to work together on new and innovative reading and writing projects.

The bid was launched at a special event featuring readings from writers including Poet Laureate Carol Ann Duffy on Thursday 15 June, in the Wolfson Reading Room at Manchester Central Library.

From its strong literary history encompassing writers such as Elizabeth Gaskell and Anthony Burgess to the robust live literature scene of today, Manchester has always been a city of storytellers. Now a consortium that includes representatives from Manchester City Council, Manchester Literature Festival, The University of Manchester and Manchester Metropolitan University is overseeing the City of Literature bid process, with the support and participation of a host of literature organisations, publishers and writers working in the city.

At the heart of the bid is an ambition for all of the city’s residents to participate in the city of literature and a recognition that reading and writing have the power to change lives. Following research and consultation, the steering committee has drawn up plans for a City of Literature programme that includes a new libraries festival, the establishment of a writers’ centre and far-reaching initiatives aimed at supporting new writing, promoting writing in translation and encouraging collaboration both internationally and within the city’s literary arts community.

Manchester is home to the world-class Central Library, as well as three historic gems – The Portico, John Rylands and Chetham’s libraries – and the legacy of its native authors is celebrated at the International Anthony Burgess Foundation and Elizabeth Gaskell’s House.

The city boasts two of the country’s most highly regarded writing schools – the University of Manchester’s Centre for New Writing and the Manchester Writing School at MMU – plus Manchester Literature Festival, one of the most innovative and popular literary events in the UK.

UNESCO Cities of Literature work together to build strong global partnerships – encouraging literary exchanges, creating cross-cultural initiatives and developing local, national and international literary links. Each city is dedicated to pursuing excellence in literature on a local level, engaging citizens in a dynamic culture of words.

Manchester City Council recently launched the Read Manchester campaign in partnership with the National Literacy Trust to raise awareness of the benefits of reading, particularly for children, and its ability to transform lives.

Councillor Luthfur Rahman, Executive Member for Culture and Leisure at Manchester City Council, said: “As the first UK city to establish a free public lending library, Manchester passionately believes in the power of literature to enhance understanding, well-being and learning right across our proudly diverse city.

“Becoming a UNESCO City of Literature will help us to build on the strong foundations of Manchester’s rich literary history and our incredible tradition of ideas which changed the world for the better. This designation would be a tremendous boost to our efforts to promote the vital values of writing and reading to all of our citizens.”

Dr Jess Edwards, Head of the Department of English at Manchester Metropolitan University, said: “Manchester Met are proud to be supporting the bid for Manchester to become a UNESCO City of Literature. We believe that arts and culture have an important role to play in promoting inclusion and cohesion in the City, as well as in the local economy. The bid identifies the outstanding strengths and assets Manchester has as a literary city, and sets out a vision for realising their full potential.”

Kaye Mitchell, Centre for New Writing, The University of Manchester, said: “Manchester is a great city for writers: our staff and students at the University know they can work here and they can draw on a long tradition of writer graduates from Anthony Burgess and Alun Lewis to Barry Unsworth and Sophie Hannah, to a new generation which includes Rebecca Perry, Chris Killen, Susan Barker, Marli Roode, Joe Stretch and Joey Connolly.

“And all of us, staff and generations of students, have benefited from the presence in the city of great publishers like Carcanet and Comma, and from the enormous array of literary events, festivals and opportunities for engagement with new writing and new audiences which this city offers.”

Cathy Bolton, Co-director of the Manchester Literature Festival, said: “Boasting a rich and radical literary heritage, a vibrant and diverse live literature scene, two world class writing schools and a proactive library service, Manchester is already a thriving hub of literary endeavour. We look forward to harnessing our collective energies in the development of some ambitious new projects, collaborating with international partners and engaging more people from across Manchester in transformative reading and writing activities.”

The bid will be submitted in mid-June, with the new Cities of Literature to be announced at the end of October 2017.