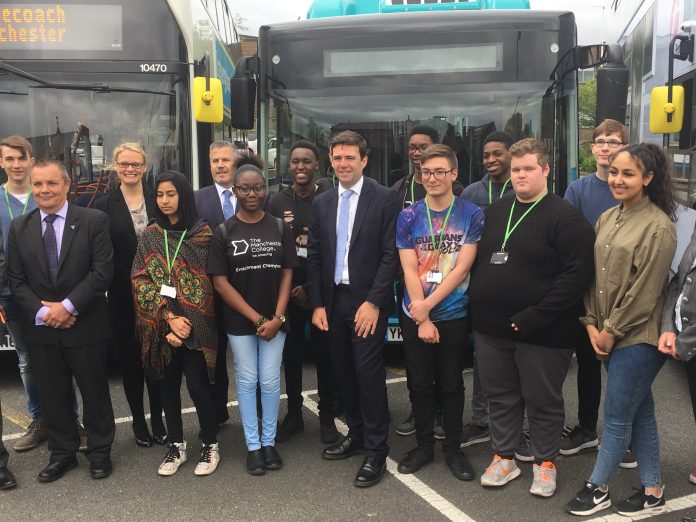 Almost 100,000 young people aged between 16 and 18 are set to benefit from half price bus tickets following a new offer agreed between the Mayor of Greater Manchester and bus operators.

The deal will see the cost of a day ticket for young people cut in half – reducing the cost of journeys and enabling young people to more easily access work opportunities, training, education and skills.

Andy Burnham, Mayor of Greater Manchester, said: “Throughout the mayoral campaign, I promised to help our young people get on in life, and this is the first step in delivering on that. We will only build a strong and prosperous Greater Manchester by giving every young person hope at the end of school and help to take up new opportunities.

“The cost of travel is a major barrier to young people’s progress and I am determined to remove it. I look forward to working together with bus operators in the future to improve the transport offer in Greater Manchester.”

The scheme will see Greater Manchester Travelcards Ltd (GMTL), which represents all bus companies in Greater Manchester, extending its multi-operator 50% discounted 16 and under ticket and introducing a Junior Day Ticket to cover 16 to 18 year olds. Eligibility to use the ticket would run up to the 31 August after the user’s 18th birthday.

As with the existing igo card scheme for under-16s, ongoing eligibility will be linked to behaviour – with poor or anti-social behaviour resulting in the card being withdrawn.

Trevor Roberts, Chairman of GMTL, said: “GMTL, on behalf of public transport operators, is pleased to be able to assist in realising the Mayor’s aspiration, by introducing a new smart travelcard product for 16 to 18 year olds, building on the already successful range of its travelcards offered across Greater Manchester.”

Phil Medlicott, Managing Director at First Manchester, adds: “As one of the major bus operators in Greater Manchester we’re pleased to support today’s announcement as we continue to work in partnership to deliver reliable and value for money bus services across the region.

“This news supports our continued aim to ensure that buses are accessible to everyone, which is why we’ve recently launched new initiatives such as allowing parents to purchase mTickets and transfer these onto their child’s mobile phone. We look forward to continuing to work with Transport for Greater Manchester and the Mayor on new initiatives to improve bus travel in the region.”

Stagecoach Manchester Managing Director, Elisabeth Tasker, said: “We already offer the best value bus fares in Britain and we are delighted to work with the mayor to deliver this significant cut in the cost of travel for young people in Manchester.

“This is one element of a wider package of comprehensive partnership proposals which would deliver an improved transport offer for Greater Manchester.

“Critical to making these improvements a reality are urgent measures to tackle rising congestion. Reducing congestion would lead to more reliable bus services and faster journey times, helping boost the local economy and improve air quality for the citizens of Greater Manchester.”

“We recognise the need to work in partnership to make bus travel an even more attractive choice, and we are already working with stakeholders and partners on plans to further enhance services.”

Lisa O’Loughlin, Principal of The Manchester College where the scheme was officially launched, said: “We welcome the proposal to make travel cheaper for our thousands of students.

Typically, over 85% of our students travel an average of more than three miles to get to our campuses for study, the majority using public transport.

“Minimising the burden of travel costs to young people can only be good in the long term, to encourage students to access the available opportunities in training and apprenticeships.

“This will benefit the future of the city, our training providers and the businesses which will be able to grow with a highly skilled and motivated workforce.”

To benefit from the discount users would be required to apply for a personalised 16-18 get me there smartcard (issued by TfGM). The new ticket and smartcard will be available from September 2017 with applications being accepted from August onwards. More details are set to be shared with schools and colleges ahead of the summer holidays.

Didsbury Mosque hits back over criticism in the Arena bombing inquiry