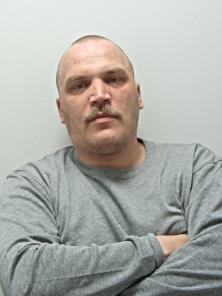 Darren Dale,41, of Reads Avenue, Blackpool was sentenced to 39 months in prison at Preston Crown Court yesterday after pleading guilty to threats to kill and attempted possession of a prohibited weapon.

Police officers went to Dale’s home address for a pre-arranged visit as he had expressed extreme right wing views in the past.Dale began to make racist comments towards Muslims and questioned further by police Dale then told the officers about his violent plans to attack and kill Muslims.

Dale also told police about YouTube videos he had watched online on how to make explosive devices.

He then showed them several weapons including a steel bar from a dumb bell, a knife and two tasers – one which he had made himself. Dale boasted the taser was as powerful as a police one and that he would simply need to connect the device to a battery for it to work.

At 10pm that same night officers revisited Dale’s home after they had obtained a search authority and arrested him.

A house search was conducted where more weapons were uncovered including a black plastic block with wires sticking out.

Speaking after the case, Head of Investigations for Counter Terrorism Policing for the North West, Detective Superintendent Will Chatterton, said: “It’s horrifying that an individual planned to carry out a pre-empted venomous attack intending to harm people because of their religion.

“As a result of our police officers working closely with Counter Terrorism specialists, Dale’s intentions were thwarted long before he could ever carry them out and I hope that is a fact that gives people good reason to be confident in the ability of the police to identify, prevent and prosecute such offenders.

Two arrested on suspicion of murder after 26 year old women found dead in...