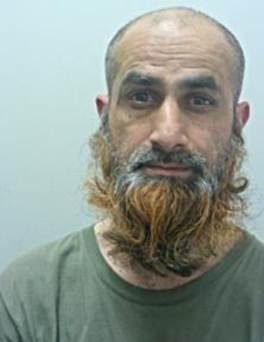 A man who boarded a train at Manchester Victoria and waved a knife around threatening acts of violence and quoting The Talibsn and 9/11 has been jailed.

Mohammed Khalil Khan, aged 50 of no fixed abode, was sentenced for 12 months at Preston Crown Court after pleading guilty to possessing a bladed article in a public place.

On the 9th August last year Khan boarded a train at Manchester Victoria station heading to Clitheroe. While on the train a member of staff was alerted by a passenger to a man making threats to commit future acts of violence, also making comments about the atrocities of 9/11 and the Taliban.

The member of staff proceeded to follow the passenger to the carriage that Khan was occupying before returning to the front of the train to call 999.

The train stopped at Darwen station where the suspect was met by a team of officers, with passengers being ushered from the train to safety. Khan was then detained where he verbally abused officers and became aggressive. Following a search of a bag pack that Khan was in possession of, a knife was found and he was arrested on suspicion of possessing a bladed article in a public place.

Detective Chief Inspector, Kay Dennison, of Counter Terrorism Policing North West, said: This was a terrifying incident for the passengers to be stuck on a moving train with Khan making such concerning threats.

“His behaviour led to the train station where he was detained being closed off as a precaution, causing widespread disruption and a sense of panic in the local area.

“Khan’s behaviour was frankly very worrying and completely unacceptable to cause fear in a public place. I’d like to thank the members of the public who reported Khan and offered to be witnesses and the train staff for their quick action in alerting police.”