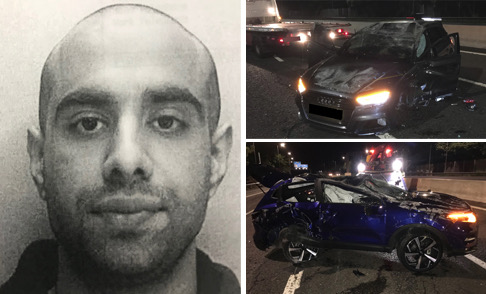 A 29 year Birmingham man has been jailed for over seven years following a serious collision where four people were injured near Worsley.

In August 2018, Tabassum was involved in a collision which resulted in two men and two women being injured – with one of the women suffering a serious hand injury that is likely to affect her for the rest of her life.

Tabassum was driving an Audi A3 when he collided with a Nissan Qashqai whilst attempting to overtake on the M60 near Worsley. Following this collision, Tabassum fled from the scene and failed to report the collision to emergency services. He then tried to pervert the course of justice by claiming that his car had been stolen.

Following a lengthy investigation to locate the driver of the Audi and bring him to justice,Tabassum was arrested in December 2020 and remanded in custody.

Tabassum was also sentenced for several other offences in the Midlands.

PC Jon Gorton, of GMP’s Road Traffic Policing Unit, said: “Firstly, I would like to wish the woman who suffered from serious injury all the best for a full recovery and would like to thank everyone who was involved in this investigation, including the victims and witnesses and colleagues from West Midlands Police for their support in aiding our enquiries and their patience in the process which has led us to this result today.

“Tabassum was a coward who thought he could escape the consequences of his actions by scheming and lying about his involvement in this collision. He had absolutely no concern for the safety of others, leaving the injured people in need of help as he failed to report the collision to the emergency services.

“I hope today’s result sends a clear message that this type of behaviour is unacceptable. GMP will always seek to find the truth and bring offenders to justice.”