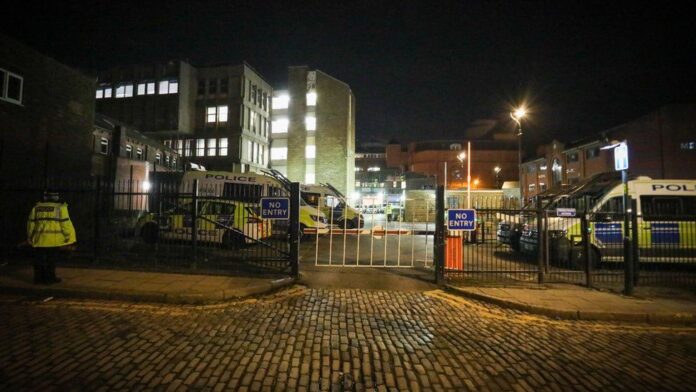 A man is being questioned under the terrorism act as investgations continue after he entered a police forecourt and attacked a police car in Oldham last night.

Shortly before 10pm on Tuesday 4 January at Oldham police station, an officer about to go on patrol in his police car saw a man who had entered the car park.

The man proceeded to run at the vehicle and attack it while making threats to the officers inside.

A 31-year-old man was Tasered to ensure the safety of the officer and the wider public after he ran at the police car and made threats, and was arrested on suspicion of criminal damage, assault of a police officer, and being found on enclosed premises.

A large cordon was put in place across the town centre near to the police station after a vehicle close to the car park was believed to possibly have suspicious items inside it.

The car was inspected by specialist search officers and was found to not contain any items of concern.

This is believed to be an isolated incident and there is not thought to be a threat to the wider public at this time.
Chief Superintendent Chris Bowen, commander for our Oldham district, said: “Last night our officers showed immense bravery and quick-thinking by detaining a man so swiftly after threats were being made and a vehicle was attacked as it was about to go on patrol.

“Thankfully, despite being understandably shaken, the officers didn’t sustain any physical injuries and we are doing what we can to support them after this incident.

“Due to suspicions raised based on enquiries made so far, our colleagues from Counter Terrorism Policing North West have subsequently arrested the suspect and are now questioning him under the Terrorism Act.

“While this will cause understandable – and shared – shock and concern in the community, I want to make it clear that there is nothing to so far suggest there is any wider threat to the public, and our officers will continue to be on the front line doing all we can to keep the streets of Oldham safe.

Man who blamed the mother for 22 month old even though she wasn’t there...

18 year old is the third person to be charged with murder of Rhamero...