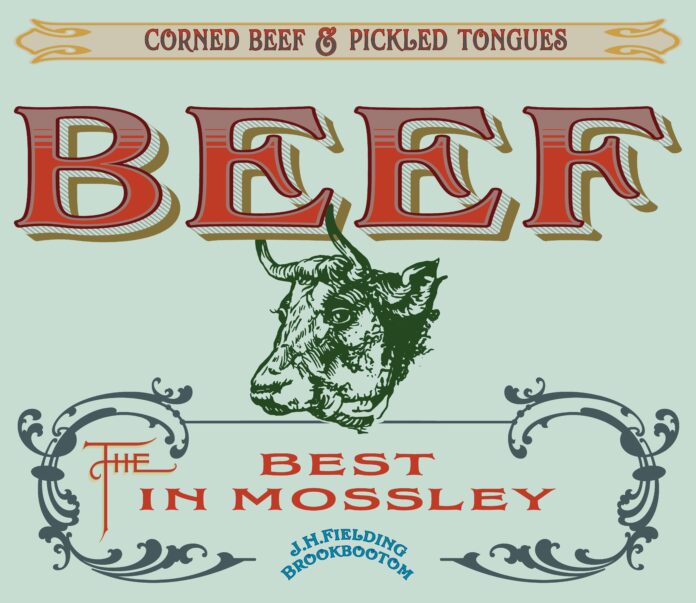 It’s all change, all change at Mossley as the station is about to receive a brand new look courtesy of a master craftsman.

The Manchester-bound platform will soon feature a new exhibition by a local artisan signwriter, inspired by the history of the town’s high streets.

Since November 2016, the Victorian station has been notable throughout the area for a series of colourful artworks by local painter Chris Cyprus. Named Northern Lights, they depicted northern towns lit up by evocative yellow sodium street lights.

A brand new exhibition by Robert Walker, who works under the moniker Signs By Umberto, will launch on Saturday 26 March 2022. The launch forms part of a day of celebrations called Up Our Street, organised by Mossley carnival arts organisation Global Grooves.

For his exhibition, Robert has drawn inspiration from the vintage signage and advertising typography of Mossley’s local retailers through the ages, including long-gone butchers shops, photography studios and drapers.

Eleven intricate sets of panels featuring his work will be fitted along the platform and in the station waiting room. The signwriter, who is a member of the Guild of Master Craftsmen, hopes the exhibition will bring the feel of a bustling olden days high street to the station.

Of particular help to Robert’s research has been a book he found at Mossley Heritage Centre, by local historians Alison Wild and Shirley Howard. Called Mossley Shops, it gives a detailed account of the town’s high streets from the 1950s onwards. The book includes many black and white images of local retailers, from W Smith’s Photographers to the original Mossley Industrial Coop.

Another influence on the exhibition has been the words of Lancashire dialect poet Samuel Laycock, who used to run a photographer’s studio on the town’s Stamford Road. His phrase “owt that likes”, from the poem Welcome Bonny Brid can be seen on one of the panels.

Up Our Street, a day-long celebration of the local high street, is supported by the Welcome Back Fund, which provides councils across England a share of £56 million from the European Regional Development Fund (ERDF) to support the safe return to high streets after the pandemic.

Though Centre For Cities data shows that smaller towns are recovering faster than their larger neighbours, with Manchester in the bottom 10 cities for post-Covid footfall recovery, towns like Mossley have still been badly affected.

Between 10am-4pm, events around the town will include artist’s talks, a light-hearted historical guided walk around Mossley’s two high streets – in Top Mossley and Bottom Mossley – a reminiscence workshop and the unveiling of an unofficial blue plaque to a high street giant.

At 10am, 12pm, 2pm and 4pm, comedy characters, Jedediah Heckerslike and Obediah Ifyoulike, will lead a humorous – but factually accurate –tour of the town’s high streets. The hapless pair will reveal little known facts about its shops, including Smiths Photography Hut and Lees’s Chip Potato Restaurant, which has a strong claim to be the UK’s oldest chippie. Now called Man’s Wok, they have been frying chips on the same site since 1863. Free tours run throughout the day, leaving the market ground. Booking is required at the-vale.co.uk/event/up-our-street

Mossley Heritage Centre is offering free samples of sweets, just like those sold in Bertha’s famous sweet shop on Stamford Street and a sip of sarsaparilla, a favourite at Frank Furness’s Herb Shop opposite the market place.

A photographic display of Mossley shops over the decades will highlight that at one time you could buy anything you needed without setting foot outside Mossley, from bread to bicycles and even water skis, wet suits and boats.

The heritage centre, which is extending its opening hours during Up Our Street and is welcoming visitors 11am-3pm, can be found in the Emmaus building on Queen Street.

On Stamford Street, Café Sweet Vintage will host a drop in reminiscence workshop from Mossley Writers between 10-12pm. People of all ages are asked to come and share their memories of the high street and what it means to them.

The Mossley Chalk Walk will see a bland stretch of Stamford Road, opposite Jacob’s Ladder, transformed into a river of colour and you are invited to come and make your mark in words or pictures from 10-12pm.

During the day of celebrations, Sarah Hardacre, Up Our Street project manager, will unveil an unofficial blue plaque at 10 Stamford Street. The inauspicious location, next to the laundrette, was previously home to Mossley Sports, the first retail outlet owned by John Wardle and David Makin, who went on to found the JD Sports chain.

Signwriter Robert Walker, who is based at Mossley artists’ studio Woodend Mill, will give talks about the making of his exhibition at Mossley Station at 12.30pm, 1.30pm and 2.30pm. Spaces at each free talk are limited to 10 and booking is required at the-vale.co.uk/event/up-our-street

And Mossley Town Team is holding a craft market with vintage and homemade items at the Methodist Church from 11am-2.30pm.

Sarah Hardacre, project manager for Global Grooves, said: “The history of Mossley’s high streets is the history of its people.

“Though times change and the high streets have had their ups and downs, they continue to serve the community well, with their many friendly shops, pubs, cafes and community centres.

“Mossley was home to the first Co-operative Society shop in Tameside in 1856, has been a Fairtrade town since 2011 and our research revealed that JD Sports actually began on one of Mossley’s high streets. For a small town, it has always had a lot going on!

“It has been fascinating uncovering little known tales of the town’s past and I am looking forward to sharing them during this day of special events and after that, via a new website.”

Leon Patel, CEO, Global Grooves, said: “It was always our ambition to have a rolling programme of exhibitions at Mossley Station.

“As sad as we are to say goodbye to Chris Cyprus’s work, which is now looking worse for wear after all that Mossley’s weather can throw at it, we are delighted to be able to share the vision of another local artist with station users.”

Robert Walker, station artist, said: “I take inspiration from craftsmanship that spans generations, lettering that is rooted within our heritage and carved into our architectural and industrial past.

I find it deeply fascinating that as we research projects via black and white photography, that in actual fact the high street wasn’t black an white but bursting with colour.

“Each sign would depict an air of social class, advertising the goods on sale and denoting social progression through the form of lettering and the colour used to illuminate the sign.”

Up Our Street runs 10am-4pm on Saturday 26 March 2022. Historic images and  fascinating facts about Mossley’s high street through the ages can be found at https://www.globalgrooves.org/learn/up-our-street