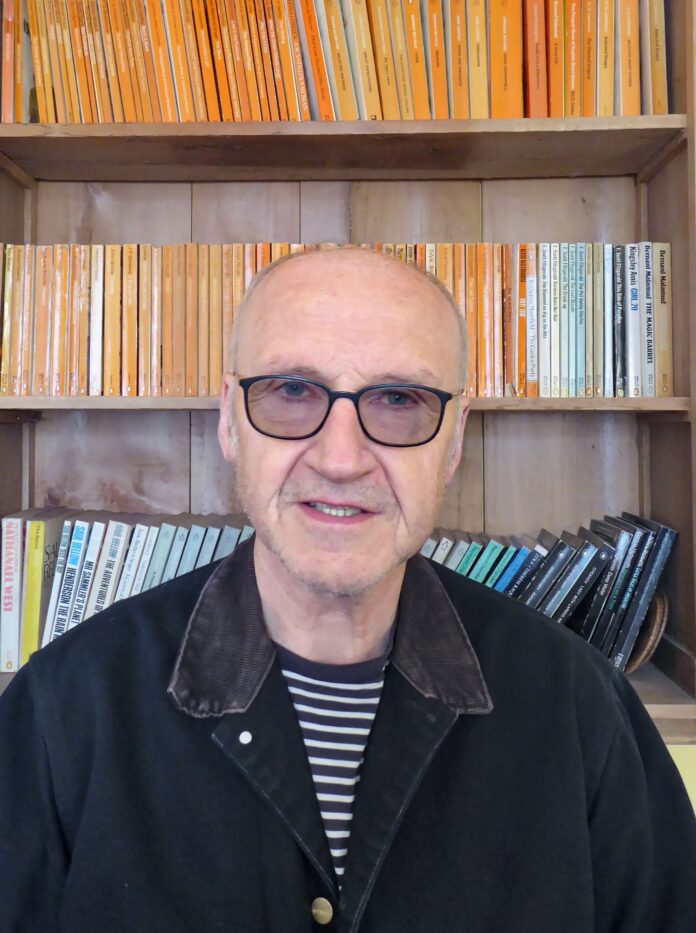 A Chorlton writer has released a novel that lovingly brings large parts of 1980s Manchester back to life.

Robert Graham, a creative writing lecturer, says The Former Boy Wonder, published by Lendal Press on 24 February 2022, is in part a chronicle of his love affair with the music-loving city he moved to almost 40 years ago.

The book, his second novel, follows the highs and lows of 49-year-old Manchester-based music journalist Peter Duffy as he increasingly finds work hard to come by at fictionalised versions of Mojo and Uncut magazines, where he has been freelancing for over 25 years. The story follows the music fanatic and father of one as his first love, Sanchia, looks like she might be about to come back into his life. Belfast-native Peter descends into a full-blown mid-life crisis, risking his relationship with his teenage son and wife in the process.

The novel is not autobiographical, though Graham, 66, was also born in Belfast and cut his teeth as a music writer with now defunct Manchester what’s on guide City Life, after moving to Hulme in 1984.

Old Manchester haunts revisited in The Former Boy Wonder include San Marco cafe, which was located just off Spring Gardens, as well as band venues The Boardwalk (Little Peter Street), The Gallery (Peter Street) and The Hardrock in Stretford, a short-lived 3,000 capacity venue that hosted gigs by acts including Bob Marley, Roxy Music, Led Zeppelin and David Bowie. Situated on Greatstone Road for just three years in the mid-1970s, a B&Q was later built on the site, which itself closed down in 2015.

Other historical hotspots namechecked in the book include the Free Trade Hall, where, in 1966, Dylan was barracked for abandoning folk music to go electric (one of the audience famously shouted “Judas” at him) and the student union in Manchester Poly’s Cavendish House, where U2 once played to a couple of hundred people.

Goulden Road in West Didsbury and Beech Road in Chorlton are both essential settings as the plot unfolds.

Graham said the book, with its themes of midlife, first love and fatherhood, had been on his mind for at least a decade and he is excited to finally have it in print.

The story takes place across several time zones and locations: early 1980s and 2010s Manchester, Northern Ireland in the 60s and 70s and Notting Hill in the early 80s.

Graham, who taught creative writing at Manchester Metropolitan University between 2004-2014 and once (briefly) managed Manchester punk band Membranes, said: “I moved to Manchester in 1984, and have seen the city shed its skin and reinvent itself many times.

“It’s what Manchester does best, and I don’t mourn the passing of the venues, bars, restaurants and neighbourhoods that are no longer there. Manchester is a future-looking city. It always has been, from the building of the Manchester Ship Canal through the Commonwealth Games to the creation of Media City. It’s been a lot of fun to recreate the Manchester I knew in the 1980s, though –West Didsbury house-shares, Fallowfield bed-sits and the many venues where I watched the bands of the day play. I think readers of my book will enjoy taking a nostalgic trip back in time, too.”

Graham said that like his protagonist Peter, he has been an obsessive music fan since childhood.

“Growing up in Belfast during the Troubles, where the bands I was reading about in the NME never played, prepared me to be blown away by living in Manchester with its impressive musical tradition and by what was happening here in the 80s,” he said.

“It was possible to see any major band that passed through town, from Elvis Costello and The Clash to The Stones, but also to be a part of the scene when homegrown talent like New Order, The Smiths and The Fall were breaking through.

“Working at City Life, the listings magazine, I got to interview Morrissey and Marr just before their first album came out and Mick Hucknall before Simply Red signed with a major record label. For a boy who grew up in band-starved Belfast, it was a transformative experience. In this and many other ways, Manchester has become a part of me, and as soon as I moved here I couldn’t imagine living anywhere else.

“In fact Manchester looms so large in the book that it’s almost a character in its own right.”

Your Guide to Improving the Safety of Your Cross-Country Drive