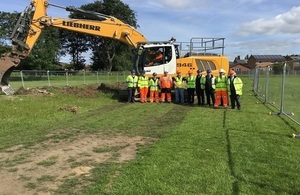 A sod cutting ceremony marked the launch of a flood scheme which will protect more than 800 homes and local businesses.

The scheme, costing £40 million, is part of the Environment Agency’s programme of £2.6 billion investment into flood defences across the country

The scheme, which will be delivered in two parts, will reduce the risk of flooding to over 800 local homes and businesses across Radcliffe and Redvales. It will also help keep transport routes and infrastructure open during times of flood, maintaining vital links in an area that was severely affected by flooding in December 2015.

The formal start to the first phase of the scheme was coupled with a guided walk of the site where the flood defences will eventually be placed. Once completed, this phase of the scheme, will see a 2.5m flood wall built at the rear of properties in Parkside Close, and a 3m-high earth embankment on the far side of the park with football pitches acting as a natural floodplain.

Work in Close Park will also include the creation of new wildlife habitat and increased amenity areas for the public.

Raids on eight Salford businesses have netted a haul of more than 50,000 counterfeit...