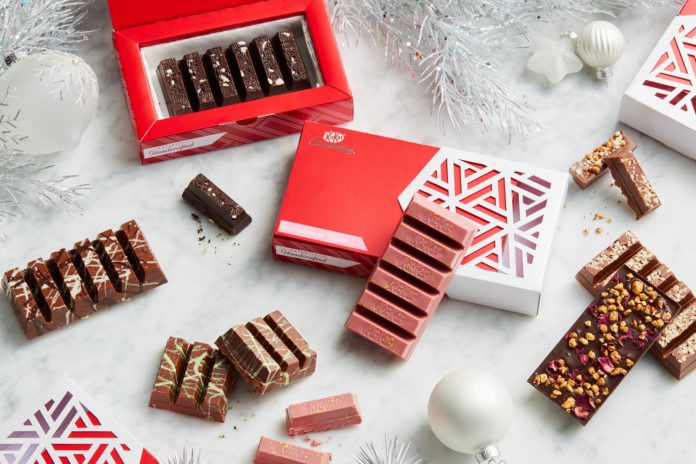 John Lewis & Partners has today announced that next week  it will open a 900 sq ft Chocolatory KitKat pop up at its Trafford Centre shop. This will be one of two shops in the UK where KitKat fans can buy new, exclusive ‘Best of British’ flavour bars,  all handmade by expert Nestle chocolatiers in the shop.

The ‘Inspired by Best of British’ bars, which are exclusive to John Lewis & Partners, are inspired by loved British desserts and other classic British flavours. The flavours are – Cherry Bakewell, Marmalade, Apple & Rhubarb Crumble, Earl Grey, Blackberry & Elderflower, Lemon Posset and Dandelion & Burdock.

Customers will be able to make up gift boxes of their favourites from the seven ‘Inspired by Best of British’ flavour KitKat bars and have the box personalised with a message etched by laser.

The pop up will also sell six handcrafted ‘Special Editions’ flavoured bars – Nuttlylicious, Zingtastic Gin and Tonic, Billionaire’s Treasure, Jewels of the East, Springtime in Japan, Whisky and Ginger, all of which will also be available at the shop and on johnlewis.com

Isabel Macdonald, Head of Branch, John Lewis & Partners, Trafford Centre said; “I think our customers will love making up personalised gift boxes from these unique Best of British bars, which are only available in our Trafford and Oxford Street shops. These special KitKats will make fun and unique Christmas gifts and stocking fillers.”

KitKat was invented in York back in 1935 when the first four-finger bar was introduced as the ‘Rowntree’s Chocolate Crisp’ before the name ‘KitKat’ was adopted a couple of years later. In the 84 years since, the brand has become a global phenomenon including in Japan where KitKat is considered lucky and, famously, has been made available in more than 300 weird and wonderful flavours since the turn of the millennium, including purple potato, green tea, pumpkin and sake.