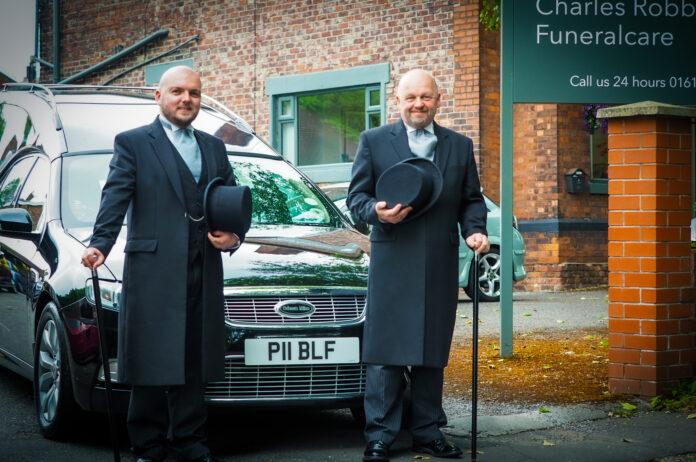 With Father’s Day coming up next month, a local man from South Manchester is encouraging more people to explore a career in the funeral sector, after he successfully referred his Dad to the industry.

Whilst in his second year of University studying for a pharmaceutical degree, Pete came to realise that his passion instead lay in empathising with, and caring for, people. When he saw that Co-op Funeralcare was launching a recruitment drive, he successfully applied for the role of Funeral Arranger and packed in university. Within just months of starting the job, it became apparent that this was indeed his calling and the start of a long and fruitful career, in offering support and guidance to his local community.

Almost ten years later, he’s now responsible for sensitively conducting meetings with families to help them create the most fitting tributes for their loved ones.

When asked about his proudest achievement, Pete said: “Every single day that I’m able to care for someone’s loved one, while allowing their family and friends to say goodbye to them, is a proud day for me.

“We meet people at what can be the most difficult part of their lives. When clients approach me in the community to thank me for making their hard time easier to deal with, it’s undoubtedly the most rewarding part of my job.”

When Pete’s father, also named Peter Eastwood (Senior), was made redundant from his role in adult social care, Pete knew that his dad would be the perfect fit for the industry. As a result, he managed to talk his dad round in applying a role, which, to his surprise, he was successful with.

Peter joined the industry and, like his son, took to the role quickly. When their beloved father and grandfather sadly passed away after a short and brave fight against cancer, the duo put their training to the test and were finally able to conduct an incredibly touching and personal funeral together.

Speaking of the bereavement, Pete said: “Grandad never let his illness get him down and was always very practically minded. So much so that when he received his terminal diagnosis, he asked for Dad and me to look after him when the time came.

“At the crematorium, Dad and I walked in front of the hearse together all the way to the chapel and I can’t say I’ve ever felt prouder to do what I do – to be able to give Grandad the proper send-off he deserved and to support Dad on what was no-doubt a really hard day for him.”

When asked about his favourite part of the role, Pete (Junior) said: “It’s a fact of life that death doesn’t discriminate and it’s something that touches everyone at different points throughout their lives.

“I love getting to know people and getting to know a bit about their loved one who I’ve had the honour of caring for.  Working in a city as diverse as Manchester, one of the best things about working here is the sheer variety of different beliefs and cultures we deal with. Not one day is the same.

“It’s a privilege to be able to learn about the different ways people say goodbye and be able to adapt and conduct a funeral that best reflects their wishes.”

City Centre murder victim may have been passer by say police