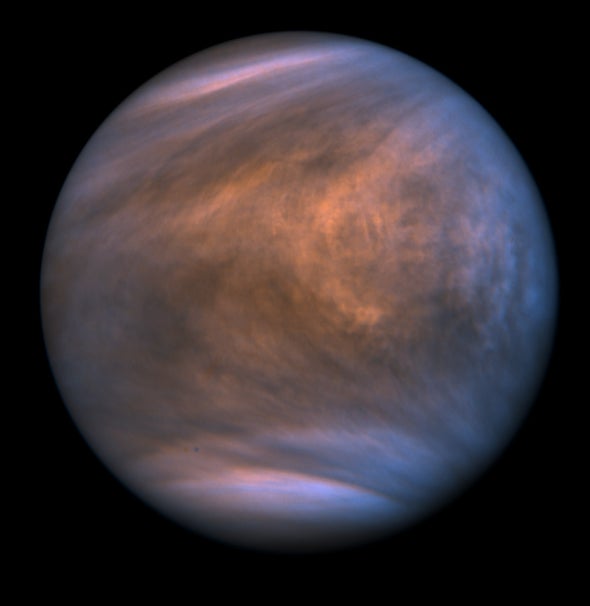 A team of astronomers including UK scientists from Manchester and Cardiff, today announced the discovery of a rare molecule – phosphine – in the clouds of Venus that may mean that life is present

On Earth, this gas is only made industrially, or by microbes that thrive in oxygen-free environments.

Astronomers have speculated for decades that high clouds on Venus could offer a home for microbes – floating free of the scorching surface, but still needing to tolerate very high acidity. The detection of phosphine molecules, which consist of hydrogen and phosphorus, could point to this extra-terrestrial ‘aerial’ life. The new discovery is described in a paper in Nature Astronomy.

The team, led by Professor Jane Greaves of Cardiff University, first used the James Clerk Maxwell Telescope (JCMT) in Hawaii to detect the phosphine, and were then awarded time to follow up their discovery with 45 telescopes of the Atacama Large Millimeter/submillimeter Array (ALMA) in Chile. Both facilities observed Venus at a wavelength of about 1 millimetre, much longer than the human eye can see – only telescopes at high altitude can detect this wavelength effectively.

Professor Greaves says, “This was an experiment made out of pure curiosity, really – taking advantage of JCMT’s powerful technology, and thinking about future instruments. I thought we’d just be able to rule out extreme scenarios, like the clouds being stuffed full of organisms. When we got the first hints of phosphine in Venus’ spectrum, it was a shock!”

Naturally cautious about the initial findings, the team were delighted to get three hours of time with the more sensitive ALMA observatory. Bad weather added a frustrating delay, but after six months of data processing, the discovery was confirmed.

Team member Dr Anita Richards, of the UK ALMA Regional Centre and The University of Manchester, adds: “To our great relief, the conditions were good at ALMA for follow-up observations while Venus was at a suitable angle to Earth. Processing the data was tricky, though, as ALMA isn’t usually looking for very subtle effects in very bright objects like Venus.”

Greaves adds: “In the end, we found that both observatories had seen the same thing – faint absorption at the right wavelength to be phosphine gas, where the molecules are backlit by the warmer clouds below.”

Coronavirus Latest-Death toll reaches 30615 as Raab confirms road map will be set out...