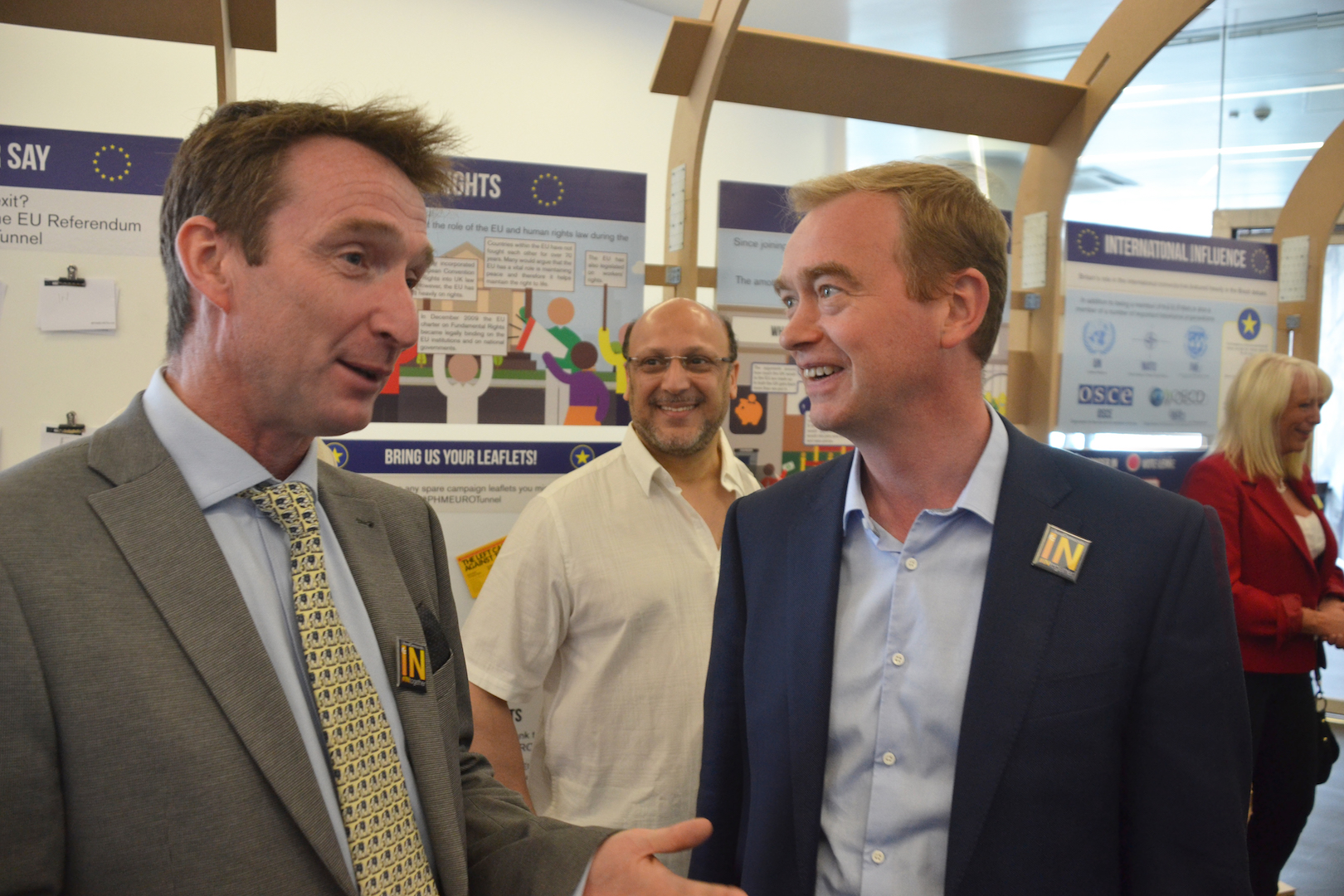 Lib Dem leader Tim Farron was in Manchester this week visiting the People’s History Museum EU Referendum tunnel,  designed to demystify what the EU is, how it works, and highlight the arguments for and against leaving and About Manchester caught up with him and newly elected Cllr John Leech.

The pair have accused the EU Campaigns for focusing too much on the South.

“This decision is final, and too important for it to become a blue on blue slugfest between two Eton boys who would struggle to understand the life of a factory worker from Mosside or a retired nurse in Burnage.” said Farron

First of all we asked Tim whether a decision as important as this should be left up to the people? Many people they said had posed that question and while Tim did not want Britain to go down the Switzerland route of a referendum on just about anything, we are having it and it is up to the remain campaign to make the case to the people to stay in the EU.

They have concerns though that many people feel that they don’t know enough about it to make that decision in what is a massively important judgement.

Tim believes that the opinion polls which are currently showing a tight  finish are massively underestimating the amount of Do not know’s and are waiting as if to assimilate information that they are not currently being given .

Much of the debate has centred around immigration and contributions that the country makes to the EU budget and Tim had some important points to raise on this. We talked as the overnight news had seen the defection of the Tory MP Sarah Wollaston to the remain camp, a move that Farron put down to her realising that the numbers being put around by the Brexit Camp were simply not true.

“Our net contribution to the EU is about £6B a year, Britain earns around £78B a year from being in the single market and someone with limited maths understands that is a massive gain to the United Kingdom”

On immigration he accuses the leave camp on deliberately muddying the water. ” There is a lot of dog whistle racism going on…..Nigel Farage effectively saying that being in the EU will lead to an increased likelihood of women being raped…tank is frankly a disgrace and people like Gove and Boris Johnson need to distance themselves from that.”

Another point though that he says on the migration issue is that it has now become obvious that if we were to leave and then want access to the single market, we would have to agree to the free movement of people anyway.

“I wouldn’t want to be in the shoes of the Brexit campaigners if they win and the people that voted for them realise that the main reason they voted was actually a lie.”

Tim also points out that the number of British people that have moved to Europe to work, study or retire is almost the same as those that have come to this country in the opposite direction.

What about Manchester and the NW? The reality is says Tim that if we were out of the EU, the thought that London and the SE would distribute money for infrastructure to the region as we have had from the EU isn’t going to happen quickly. EU money at the moment, he adds, goes over the heads of the capital cities and goes more quickly to the areas that need it. As Tim points out Manchester has turned itself into a European capital in the last thirty years and has been radically altered for the better as a consequence of it.

Fifty two per cent of the North West’s exports go to the European Union, ” we are more likely to see the cost of those exports go up” and that will have a massive impact on investment and jobs in the region…..”whether current investment is likely to remain, well you have better ask them, but what is more likely is that new investment will be less certain if we vote to leave.”

Councillor John Leech made the point that Siemens, one of the biggest employers in the south of Manchester have made it clear that they would look hard at future investment if the country decides to go its own way.

Manchester is one of the country’s centres of science and technology.The millions poured into the new Graphene research facilities has come from the EU and the ability to exchange research across Europe is also made a lot easier by being on the inside, so this part of the country has a lot of lose if we vote for Brexit.

Finally a message for the people of Manchester from the Lib Dem leader:

“You are a major European capital and as a Lancastrian and an adopted Cumbrian, you are my capital, so please continue to be just that”

The Euro Tunnel is a temporary exhibition that runs until the 28th June at the People’s History Museum in Manchester.