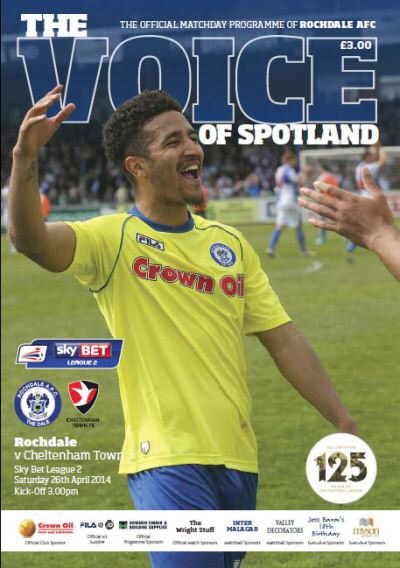 Northenden Golf Club found itself under fire from the Forestry commission and angry local residents after it cut down thirty mature oak trees as part of its plans to replace its clubhouse which burnt down last year.

Rochdale got another battering over the weekend as it was reported that one of its footballers, Bastien Hery, not we hadn’t heard of him either.had branded the town, a cold and gloomy dump.

For those not in the habit of following the careers of lower league players, Monsieur Hery, a former Paris St Germain Trainee, who incidentally lives in Stockport and who signed for the club in the summer of 2013, denied that he had called the town a dump, hours after the story broke.

He did admit though that he didn’t want to live in the town, and that most of the fans who attend Spotland are old.

The town’s MP Simon Danczuk was as always quick to defend Rochdale, telling the local paper.

“I spend the majority of my time in Rochdale and cannot think of a better place to live.I have visited Paris, where Bastien is from, on a number of occasions and there are numerous parts of that city that can be described as a dump.”

Heritage Lottery money was in the news.This weekend sees the opening of the Whitworth Gallery after a £15m refit which has transformed the 125 year-old building into a 21st-century gallery in the park.

There was also good news for Quarry Bank Mill which announced that it was the recipient of nearly £4m which would go towards the funding of the restoration and opening of a worker’s cottage and the village shop in Styal Village, restoring the Upper Garden to its former glory, opening Quarry Bank House to the public and improving access around the site with a new network of paths and roads.

We had a sneak preview of a new exhibition opening his weekend at the People’s History Museum. It seems you can’t hide from the election anywhere now but we liked the idea of the people down there having acquired an artist to explain the rudiments of the political process for the non initiated. Our thoughts go out to Alex Gardner.

In case you might have missed the news, 50 Shades of Grey is hitting screens this week and Manchester Bar in the sky, Cloud 23, has created two special inspired cocktails.

The Daring and Dangerous, Christian’s Kiss, created with pomegranate, luscious Lanique, tantilising Don Julio tequila and champagne, is designed to raise temperatures long before you set foot in front of the big screen, while Passion Rising built on a foundation of El Dorado rum and teased with a dash of Lanique, orange zest and hibiscus syrup is said to be every bit as dashing as its name suggests.

Finally on the subject of film, this week’s BAFTA’s saw no success for the Alan Turing biopic Imitation game but Salford’s own Mike Leigh did manage to scoop the highest honour the Grandees can bestow being awarded the Bafta Fellowship.

Manchester research warns on use of sunscreen in preventing skin cancer