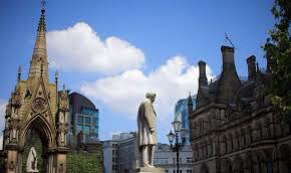 So the Scots have decided to stay with us after all that.

There seemed to be glut of our local politicians heading North this week to persuade them to stay. Someone told me it was more to do with the fear if losing those Labour MP’s in Scotland rather than any great yearning to keep the union together.

But it seems the argument of local democracy is far from dead.Indeed the vote maybe just the start and Manchester could be an the forefront. This week we have had Devo Manc.

Of course the trouble with all this is that we will still have the same leaders no matter what. I really don’t fancy the idea of having my taxes set by people who have been elected with less than 20 per cent of the people turning out to vote.

Maybe we should get our own house in order anyway.I have Ben reading a report that says that a baby boy born in Manchester can expect to live seventeen years less than one born in Surrey.Scandalous and the report also says the difference applies to one born in the East and North of the city as opposed to Didsbury and Chorlton.

Manchester has been at the centre of the news for other reasons this week, notably all the money raised after the fire at the Harpurhey dogs home. The response was massive over a million and a half raised. We are after all it seems a nation of dog lovers. I wonder though how much would have been raised if they had been collecting for homeless people. Would the Evening News have even set up a charity page?

I was pleased to hear about the man who tried to gun down a victim outside a Fallowfield barber’s shop and was caught after he left his DNA on a lollipop found in the getaway car.

He got seventeen years in prison, his intended victim survived the gunshot wound and was able to get into a car and was driven by his cousin to hospital where he had emergency surgery.

It has been a funny old week in Manchester, summer is continuing , they say it is as hot as the Algarve. The food and drink festival is on and I pooped down to Albert Square yesterday to see it and can thoroughly recommend the cider from Somerset.

I hear that Gary Neville will be there next week doing some cooking, probably just publicity for his new hotel I guess.

Romeo and Juliet and Hamlet have both opened in Manchester to rave reviews. The former is at the Victoria Baths on Hathersage Road, that’s the place that got all that restoration money from the BBC.

Some Manchester bods have been looking at Martian meteorite and have come to the conclusion that there could be life on the planet after all. A Professor Lyon, based in Manchester’s School of Earth, Atmospheric and Environmental Sciences says that it could have held a cell like structure with all the requirements for life.