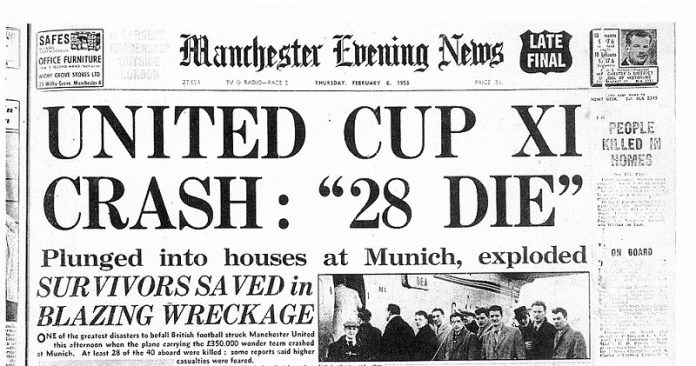 The consequences of the Munich air disaster for English football, sports journalism and Manchester will be discussed at an event to mark the 60th anniversary of the tragedy.

Twenty-three people were killed on 6 February 1958 when a charter plane crashed after refuelling at Munich Airport. Among the dead were eight Manchester United footballers, part of the famous group known as the ‘Busby Babes’.

The crash also claimed the lives of three club staff, eight journalists who had travelled to cover United’s European Cup tie in Belgrade, as well as plane crew and other officials.

‘Munich 60 years on: How British sport changed’ will bring together the city’s football journalists and sports historians, as well as football supporters and friends and relatives of those affected by the tragedy to explore how the crash changed the city as well as the nature of British sports journalism.

The event, which takes place on 7 February at Manchester Metropolitan University, will also explore how the anniversary is being covered this year for a global, digital audience.

Organised by Vince Hunt, Lecturer in Sports Journalism at Manchester Metropolitan, the evening will feature guest speakers and personal memories as well as the screening of films from the North West Film Archive about the crash.

“Our event will bring together fans, football writers, historians and friends and relatives of those affected by the crash to explore the consequences of one of Manchester’s most tragic events.”

Dr Guy Hodgson, sports historian at Liverpool John Moores University will look at the effect of the disaster on the England national football team and how the 1966 World Cup winning team could have looked very different if a generation of talented English footballers had not been wiped out.

Alice McKeegan, Head of Football at the Manchester Evening News, will speak about coverage of the event not only for a football-mad city but also for millions of United fans around the world.

Paul Clark, Lecturer in Sports Journalism at Manchester Metropolitan, will remember the sports writers who died on the plane, including former Manchester City goalkeeper and reporter for News of the World Frank Swift and consider how the nature of sports journalism changed as a result.

The North West Film Archive will showcase a selection of Munich films from its vaults, including rare colour footage of the Busby Babes from 1957, specially recut for the anniversary by the Journalism department at Manchester Metropolitan University.

The event is a partnership between Manchester Metropolitan, the Manchester Evening News and the North West Film Archive.

Registration for the event is free. Tickets are available now via Eventbrite.

Man and teenager arrested after vicious attack on woman with machetes in Leigh during...