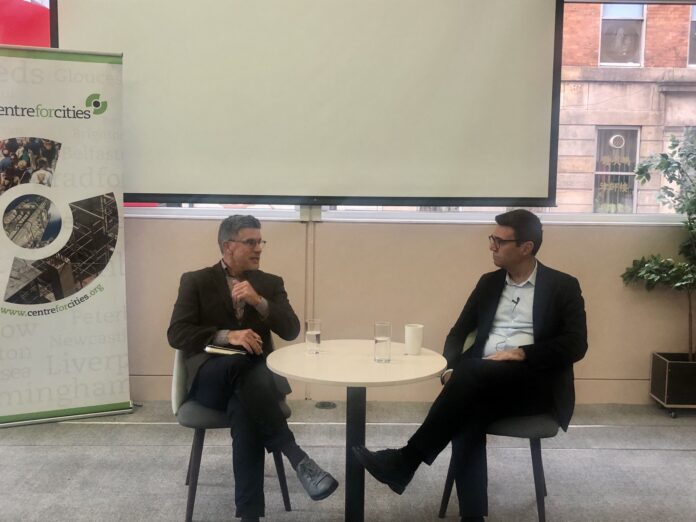 However in a warning to the Government But he said that it’s seven years since George Osborne came to Manchester to launch his Northern Powerhouse and very little has changed.

Levelling up, he added, is still in danger of being a mere slogan and if it became another divisive issue that will be a disaster for the country

The levelling up agenda has changed over the past two years the Mayor claimed.

He reminded people that days into his Premiership Boris Johnson stood in front of Stephensons Rocket at the Museum of Science and Industry and promised to level up the North.

The agenda has now been blurred he claimed, partly because of the pandemic but also lots of other influences have joined the agenda

Michael Gove, appointed in the cabinet reshuffle to drive the levelling up agenda brings real energy to the agenda the Mayor , following a meeting with him earlier that day, believes that he will bring clarity

For Burnham in Greater Manchester, aLondon type transport system would provide the general public with the evidence that levelling up has occurred.

Revealed at the weekend Greater Manchester asked the Government for capital and revenue funding, a billion pounds on the capital side which will include electrification of the buses on the same basis as the tram system and £250m on the revenue side will pay for London frequency and prices

London’s transport has, said the Mayor been subsidised for decades, Manchester has had to stand alone

Let British Cities punch their weight, and and be given more autonomy like in Europe and in America, said the Mayor with a warning to Nicola Sturgeon that the nationalist agenda was holding back the Glasgow’s and Edinburgh

Should Mayors have revenue raising powers he was asked?

Greater Manchester he revealed is launching a voluntary tourist tax this week to tackle homelessness but as a general principle Mayors need to be careful and cautious about how they do it.

Preparing for the busiest night of the year