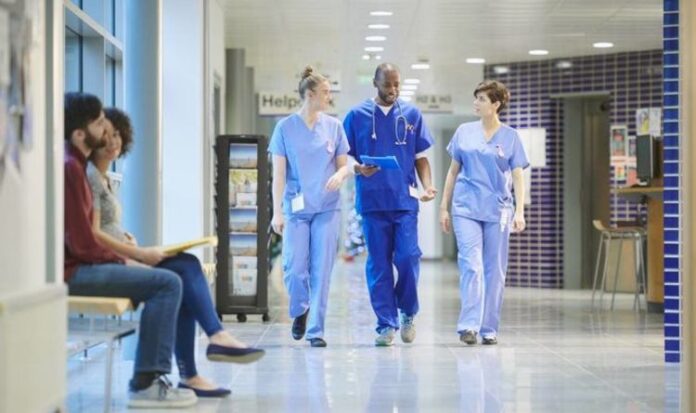 A ‘new deal’ for key workers — including a £500 thank you bonus, extended sick pay and paying the real living wage — is needed to reward them for their heroic efforts during the pandemic, a report says.

Frontline Fatigue by the Royal society for arts, manufactures and commerce (RSA) warns of widespread stress and disillusionment with the public.

It warns that half of key workers fear they will soon “burnout” — rising to 63% in the NHS.

Supermarket workers feel the least supported, with 68% think the public is letting them down. NHS workers are the most likely to feel supported.

The RSA calls for a ‘new deal’ for key workers, and suggests a new online sales tax’ on Amazon, and a levy on PPE ‘pandemic profiteers’, to pay for the package – which would include a one-off payment of £500 as a reward for the hard work and sacrifices made by key workers during the pandemic. This is nspired by Joe Biden’s hazard payments to emergency workers, which helped win him the support of many blue-collar Americans.

They also recommend the introduction of enhanced Statutory Sick Pay for all workers, especially for key workers who would not currently qualify (for instance, care workers on zero-hour contracts).

Mandating the Real Living Wage for all key workers (currently £9.50 outside London and £10.85 in the capital). The RSA’s analysis finds that 37% of social carers earn less than the Real Living Wage currently and a £250 million benevolent fund for those struggling with mental ill-health and personal/family emergencies.

“Our survey shows key workers feel deeply let down by the government, with its approval rating falling to just 3 points among key workers who voted Conservative in 2019.

But they feel especially let down by the public too, with supermarket workers especially feeling unsupported.

“Rishi Sunak has a chance to put this right, which is why we’re calling for a new deal for key workers, inspired by Joe Biden’s election-winning proposals for blue collar ‘hero pay’.

“It’s only right that those who’ve profited from the pandemic – including online sales giants like Amazon, and those selling PPE – should help support the heroes who’ve kept us safe and fed.”

Man in court after 28 year old driver killed in Droylsden hit and run...