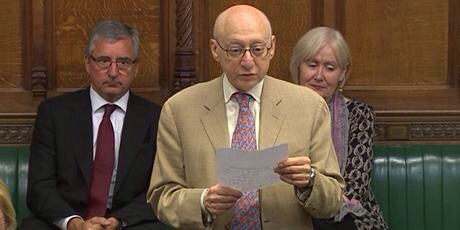 Gorton MP and father of the House of Commons Gerald Kaufman is under fire for comments he has made about Jewish donors having influence on the Conservatives’ party policy on Israel.

But his new leader Jeremy Corbyn in a statement said that Labour Party whips had been told to speak to the MP over his comments.

“Last week’s reported comments by Sir Gerald Kaufman about the Jewish community, the Conservative party and Israel are completely unacceptable and deeply regrettable,” he said in a statement.

“Such remarks are damaging to community relations, and also do nothing to benefit the Palestinian cause. I have always implacably opposed all forms of racism, anti-Semitism and Islamophobia and will continue to do so”

“At my request, the Chief Whip has met Sir Gerald and expressed my deep concern.”

There is now a big group of Conservative members of parliament who are pro-Israel whatever government does and they are not interested in what Israel, in what the Israeli government does.

“They’re not interested in the fact that Palestinians are living a repressed life, and are liable to be shot at any time. In the last few days alone the Israelis have murdered 52 Palestinians and nobody pays attention and this government doesn’t care.”

It is not the first time that the local MP has been in trouble over comments about Israel. A long term advocate of the Palestinian state, he once famously compared Israel to the Nazis.