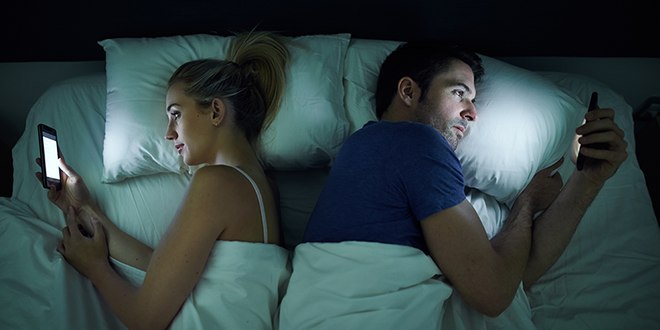 Most Brits can’t get through dinner, work or even bedtime without checking their phone according to research out from polling Company You Gov.

The Company undertook the research as part of a partnership with the V&A museum for their new exhibition “The Future Starts Here”,

And despite the health problems associated with the blue light that phones and similar devices emit, two thirds of us (65%) use our phones while in bed before going to sleep and 45% do so when they wake up in the middle of the night. Even the presence of our nearest and dearest beside us on the mattress alongside us is not enough to distract us from our devices, with 55% of married people saying they check their phones while in bed.

Three quarters (75%) of workers check their phones while at work, and as gripping as many modern TV shows have become most Brits are unable to keep their attention solely on the big screen – 86% say they look at their phone while watching TV.

Worryingly, the data also reveals 15% of drivers admitting to using their phone while driving.

Unsurprisingly, in all instances it is the youngest who are the biggest culprits – among 18-24 year olds 78% will check their phones while dining out, 81% will do so at work and 92% will do so while in bed.

So addicted are we to our phones that most Brits couldn’t go more than a couple of days without them. More than half (54%) say they could go no more than two days without their phone before it really bothered them – including one in five of us who couldn’t handle being without our phones for four hours. Among 18-24 year olds those figures rise to 63% and 23% respectively.

Hearing it through the grapevine: Would you tell a friend they were being cheated...