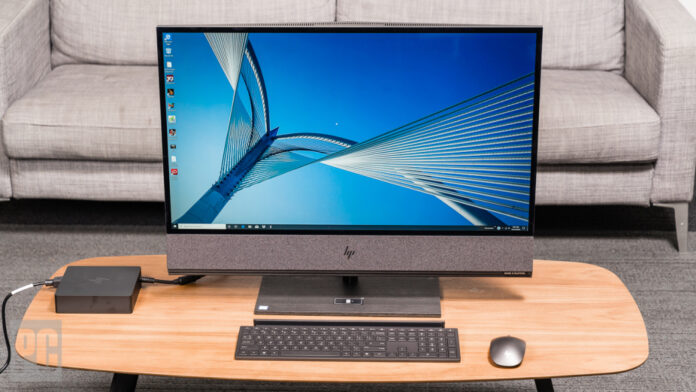 In recent years, the scope and complexity of home desktop computers have progressed at an incredible rate to the point that the systems available today would have been almost unimaginable just twenty years ago.

Of these developments, perhaps the most exciting has been the development of All-In-One systems (often referred to as AiO) computers – but just what is an All-In-One computer and what are the advantages of these cutting-edge machines? Read on to find out more.

Traditional desktop computers kept the screen and computer storage case separate – partly because the technology did not exist to combine them and partly because the idea had not been thought of yet. As per Moore’s Law (that the number of transistors on a microchip would double every two years while the price of computers would be halved), today we are seeing vastly reduced sizes in computer technology while prices have similarly tumbled.

In truth, the separate storage cases of old still contained a lot of empty space but it took these technological advances to reduce chip sizes and costs to make the all in one desktop computer concept feasible. Today’s modern desktops have a considerably smaller footprint and a far better form-factor – proving there is little doubt that the AiO concept is here to stay.

The advantages of All-In-One machines

Significantly reduced space requirements: As mentioned above, traditional desktops featured a separate tower and monitor set-up which required much more space than the new AiO configuration. Many companies struggle to find office and desk space so often these old storage-box systems were placed on the floor or behind desks, gathering dust (a computer needs substantial fresh air intake to work properly and remain cool so a dusty environment is never a good thing). With an AiO on a desk, cleaning and removing dust becomes easy, in turn leading to more efficient fans and reduced power usage.

Easier to move around (and the end of multiple connection cables): A traditional desktop took ages to take apart with multiple leads and connections having to be unplugged then put back together again. With an AiO, everything is contained within a single unit, making these machines highly portable. While that might not seem important for a desktop, imagine if you want to give a presentation to a client in your meeting room – or want to share some internet media or similar with your family – with an AiO, it is simply a case of unplugging and moving the computer.

Improved aesthetics: Good design surrounds us these days and even PC manufacturers are getting in on the act of producing machines that are easy on the eye. With its reduced form-factor and lack of lead-clutter, an AiO computer is a joy to behold – befitting of the time we live in.

Choose your specs – including touch-screen capabilities if required: Many people still think of touchscreens as being the preserve purely of phones, tablets and, in some cases, laptops however some modern AiO systems ship with touchscreen capabilities included as standard. Also (and with Moore’s Law in mind again), do not think you will have to sacrifice processing power or storage capabilities by choosing an AiO – these machines can be just as potent as their traditional tower counterparts.