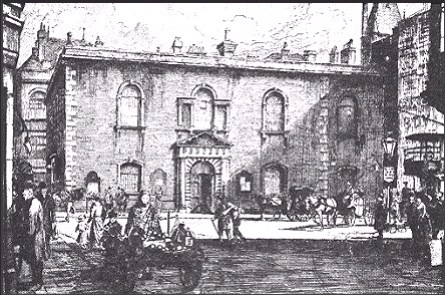 A new school was on the verge of being completed in Chorlton on Medlock.

The school of domestic economy would accommodate three hundred students, one hundred places for teacher training and two hundred for general students and it’s three floors would provide accommodation for cookery in all grades, laundry work, housewifery, dressmaking, millinery and needlework.

While working on a lift on Deansgate, two men were injured when the iron door fell on them, both were for Ardwick and were kept in overnight at the Parker Street infirmary.

There was a proposal being debated to pull down Cross Street Chapel to make way for improvements to Cross Street and the laying of new tram lines.
it was also proposed that part of the disused burial ground would be used and the committee was told that while it had sitting accommodation for 1200 people it’s congregation was now no more than 30

Manchester County police court heard of the case of two mall children who were found wondering the streets of Stretford. It heard that the children had ‘been knocked from pillar to post’ and had been sent to stay with their maternal grandfather who didn’t want anything to do with them, sending them back to Halifax to live with their father.The children were sent to a boys refuge until a suitable home could be found and the father was ordered to pay ten shillings a week towards their maintenance.

It was Bastille day in France and a military display in glorious sunshine was taking place at the Longchamps racecourse, sixteen regiments of cavelry,three battalions of artillery and sixteen aeroplanes flew over the racecourse.

Crowds lined the streets of Manchester for the funeral of the two firefighters who died in Blackley, “rarely”, reported the Manchester Evening News “has Manchester witnessed at once so simple yet impressive”.

Meanwhile it was reported from Russia that Rasputin had died of his wounds after being stabbed twice in the abdomen. He was described as the last of a long series if holy men and wonder workers who obtained influence at the court if the Russian Czar.

Welcome to Reddish say Friends of the station