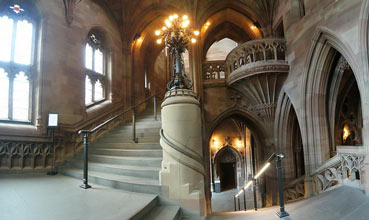 Nineteen sights and experiences across Northwest England have today been named among the UK’s best by leading travel media company, Lonely Planet.

The UK’s four constituent countries and countless small islands comprise a powerhouse of history, culture and intrigue. Now for the first time, Lonely Planet’s community of travel experts have chosen the best sights and experiences and ranked them in order of their brilliance. Lonely Planet’s Ultimate United Kingdom Travelist, published today, ranks the 500 most memorable, beautiful, surprising and compelling sights and experiences across Great Britain, Northern Ireland and the Channel Islands.

Leading the way for Northwest England at number 122 is experiencing a football match in Manchester, where “the world’s most famous team shares a city with the world’s richest (Manchester City)… Games at United’s Old Trafford ground or at City’s newer Etihad stadium are not just an exhibition of top-class football but a boisterous showcase of a billion-dollar global spectacle.”

This is joined by 18 other sights and experiences in the region including the “superb” People’s History Museum,Manchester’s Gay Village,John Rylands Library and Manchester’s Police Museum

The Edinburgh Festival Fringe takes the top spot in the list, staking its claim because “the Fringe floods the city with art and nowhere beats it for spectacle or scale… There is theatre, comedy, dance, circus, cabaret, opera, music and spoken word, and whatever the time of day, an acrobat, trapeze artist, contortionist or tried-and-tested bagpiping busker will be pleased to entertain you… Simply step through the looking glass and prepare to be dazzled by the greatest show of arts and culture on Earth.”

122: Become a fan of a British obsession at a football match in Manchester
133: Hail the struggle for social justice at the People’s History Museum
157: Be inspired at the Beatles’ childhood homes
189: Get loud and proud in Manchester’s Gay Village
215: Learn about history’s horrors at the International Slavery Museum, Liverpool
221: Get bookish in the John Rylands Library
236: Go head over heels at Blackpool Pleasure Beach
282: Have a medieval retail experience in Chester Rows
301: Explore the historic Albert Dock, Liverpool
303: Hike and cycle through the Ribble Valley
368: Take in the thrills and spills of the TT on the Isle of Man
379: Get into Godard at HOME, Manchester
420: Wet your beak at the Philharmonic pub, Liverpool
427: Seek the truth at the Greater Manchester Police Museum
443: Hang out with the cool kids in the Baltic Triangle, Liverpool
446: Uncover island life at the Cregneash Village Folk Museum on the Island of Man
448: Go on the hunt for a treasure hoard at Beeston Castle
466: Climb the Great Laxey Wheel on the Isle of Man
494: Find top culture at Manchester’s Lowry

“We will remember them wherever we are”