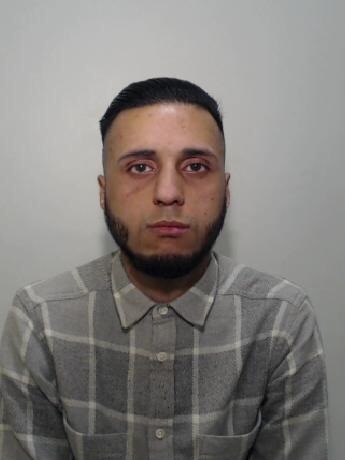 A man who followed and sexually assaulted a 16-year-old girl in Rochdale has been jailed.Umar Iqbal,25, of Ipswich Street, Rochdale, pleaded guilty to sexual assault at an earlier hearing.
Today he was sentenced at Manchester Crown Court, to three years in prison, ordered to sign the sex offender register for life, and is subject to an indefinite Sexual Harm Prevention Order.

The 16-year-old girl was walking along Yorkshire Street in Rochdale when Iqbal approached her in early March this year.

He tried to engage her in conversation but she felt uneasy and walked away. Iqbal followed her onto Princess Street and told her that he liked her and asked if she had a boyfriend.

He then took hold of the victims hand and she told him to get off but he didn’t. He then pulled her towards a garaged area and tried to kiss her. She said no and pulled away, and Iqbal sexually assaulted her.

He then pressured the victim into giving him her phone number, which she did, hoping he would leave her alone. That night he called her and spoke to her for a minute or so until the call ended.

The girl reported it to police the next day and Iqbal was traced and arrested.

Detective Constable Ben Harris of Rochdale’s Sunrise Child Sexual Exploitation Team said: “Iqbal is a sexual predator who followed a 16-year-old girl and sexually assaulted her.
“I want to commend the girl for coming forward and supporting our investigation. Help and support will always be there for people who want to come forward and report sexual offences or speak to someone about concerns they may have.

“Thankfully Iqbal is now behind bars where he can’t target any more women.”

Woman assaulted by a man while out running in Oldham