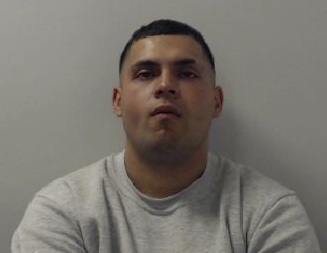 A hit and run driver who killed a motorist in Crumpsall has been jailed for nine years.

Ivan Girga 26, of Wigan Road, Bolton, was driving a black VW Golf when he collided with a silver Vauxhall Zafira – which was performing a U-Turn – on Crescent Road in Crumpsall.

Girga – who had a 3-year-old child in the front passenger seat – fled the scene following the collision. He was travelling at no less than 55 MPH within the 20 MPH zone at the time of the incident.

42-year-old Ghusanfar Ilyas from Crumpsall sadly passed away in hospital as a result of his injuries.

There were five other people travelling in the Vauxhall at the time of collision and they were all taken to hospital for treatment. This includes a 13-year-old boy who was admitted to intensive care in a critical condition.

PC Suzanne Keenan, of GMP’s Serious Collision Investigation Unit, said: “Whilst nothing can bring Ghusanfar back, I hope that today’s sentence of nine years provides a measure of comfort to his family as they continue to try and rebuild their lives.

“Girga showed absolutely no remorse and failed to take any responsibility for his actions that day, putting Ghusanfar’s family through further trauma. Having failed to stop and report the collision he made determined efforts to hinder our investigation by changing his clothing and claiming he was not the driver at the time of the incident. It was only when met with the irrefutable evidence of his guilt at his first Crown Court appearance that he finally admitted his involvement – and I’d like to thank colleagues who worked tirelessly in order to provide this evidence.

“Girga drove with no insurance and took the most catastrophic of risks when he decided to go behind the wheel – he is now behind bars. With this in mind I would make a direct appeal to those road users who see no issue in driving without insurance, driving whilst distracted, driving in excess of the speed limit and driving dangerously. You are not above the law and your reckless actions have consequences.

“I hope yesterday’s result sends a clear message to our communities that the Serious Collision Investigation Unit will work determinedly to track those down that risk people’s lives on the road – and in tragic cases like this one – will do everything possible in order to provide a small closure to the families left behind.”

Salford man who downloaded video giving instructions on how to make a terror bomb...