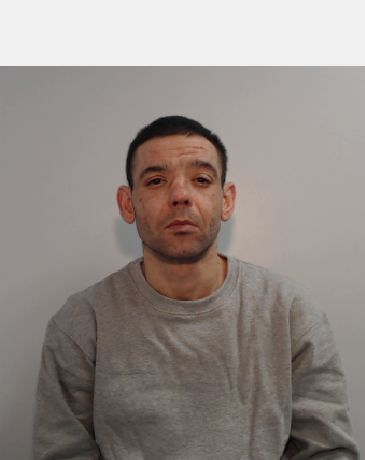 A burglar, who failed to cover his tracks by leaving a plethora of DNA, has been jailed for five years today at Minshull Street Crown Court .

Simon McWilliams aged 38 of no fixed address pleaded guilty to 12 counts of burglary in a dwellings, four counts of theft of motor vehicles, two counts of assault and handling stolen goods.

Between July and November last year, police received a number of reports of burglaries where windows and patio doors to the rear of houses had been smashed.

The burglaries – that happened across Greater Manchester and Cheshire, were not only being treated as linked because of the similar circumstances, but also because the offender had left a number of forensic opportunities for officers to investigate.

On one occasion in August 2017 in Bury, a black balaclava with a skull motif had been found outside a house after a burglary, which was later found to have McWilliams’ DNA on it.

A month later in Macclesfield, Cheshire, a man had come home to discover his neighbour holding a pillowcase full with items stolen from his house. He was told that her son had seen a man running past their garden, at which point he tried to detain him.

The fleeing offender however, tried to gouge the son’s eye out and punched him several times. His mother tried to intervene but was also hit a number of times and bitten on the leg.

When forensically examined by officers, her trousers were proved to have McWilliams’ DNA on them and a screwdriver found inside showed McWilliams’ fingerprints.
That same month in Didsbury, another man had come home to find not only had the rear patio door to his house had been smashed but there was blood on kitchen drawers, the staircase bannister and on a duvet in one of the bedrooms. The blood was that of McWilliams and a screwdriver found in a bedroom had his fingerprints on it.

Officers caught up with McWilliams in January 2018 after an Audi was taken from a driveway in Stockport. The man of the house had woken to discover his car was being driven away, at which point, he ran outside but was hit by his own car, which was being driven by a thief. Officers later located the car and when they arrested McWilliams, he dropped the key to the Audi on the floor.

When he was interviewed by officers, he admitted to all of the offences presented to him. He was later taken on a drive around where he admitted to six further burglaries that happened between January 2017 and December 2017 across the Greater Manchester area.

Detective Constable Matt Tarr from GMP’s Stockport Burglary Team, said: “McWilliams is by no means a sophisticated criminal but the pain and distress he has caused to all these innocent people is despicable.

“Once he had smashed his way into the premises, he was prepared to do whatever he could to get away with the stolen property. I hope today that the victims can have some closure knowing that he is behind bars after what I can only describe as a prolific offending spree.

“We will continue to pursue those committing such invasive crimes and urge residents that if they see something out of the ordinary, whether that be suspicious circumstances or vehicles then make a note of it and make police aware.”