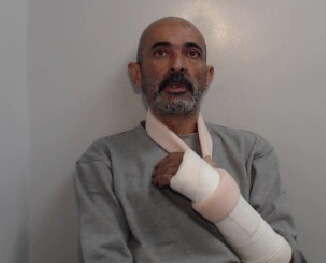 An estranged husband who subjected his wife to a campaign of violence and abuse has been jailed for 21 years.

Farhad Abdullah,54,of no fixed address stole his former partner’s dog and assaulted her in the street because of how she was dressed before stabbing her with an ornamental dagger in Wythensawe in June 2018.

He will be required to serve a further five years on licence after being released.

The couple were married 17 years before separating because of Abdullah’s controlling behaviour.

On 6 May 2018 Abdullah barged into her home on Wynward Road, Wythenshawe and threatened to kill his 50-year-old ex-partner.

He stood behind her while sharpening a kitchen knife before stealing her dog and her house keys.

Later that month he visited the address again and threatened to kill her.

On 16 June the woman was sat in a car in-putting an address into the sat nav before Abdullah appeared.

He dragged her out of the vehicle shouting: ‘Where are you going dressed like that?’ before she managed to break free and locked herself inside her property.

Two evenings later, Abdullah was seen driving around the area in a black VW Touragh before waiting in the dark for his ex-partner.

Before she was able to get into her house, he walked towards her, snatching the phone from her hand and then produced a knife from behind his back.

He lunged towards the woman’s stomach, but she managed to block the blow with her left arm, causing two deep wounds that needed seven stitches.

Abdullah shouted ‘I’m going to kill you’ before raising the knife up and thrusting it down, puncturing her skin above the collar bone.

In his possession was found the victim’s phone and a pair of handcuffs. On the ground next to where the lay was a small ornamental dagger with a curved sharp point.

Abdullah’s car was found nearby. Inside the vehicle was discovered a brown wooden-handled machete.

He was arrested and said he’d been living in his car 200 metres from wife’s address.

He denied threatening to kill her and all the previous assaults. He also claimed the knife had been planted on him by the bystanders who intervened and said his wife’s blood was on the knife because she was ‘very clever and could have put it there’ to incriminate him.

Detective Constable Lucia Barnes of GMP’s City of Manchester Division said: “Abdullah is a cowardly and manipulative individual who pursued a sustained campaign of violence and intimidation towards those closest to him.

“His controlling behaviour led to the breakdown of his relationship, as well as a restraining order that he chose to ignore while subjecting his former partner to a terrifying ordeal.

“She has exhibited extreme bravery throughout. She recognised her partner’s coercive behaviour and took steps to protect herself and her family.

“This is the first and often hardest step in escaping domestic abuse and we commend her courage.

“Abdullah’s abhorrent behaviour culminated in an extremely serious and prolonged assault with a knife.

“We’re very thankful to the good Samaritans who came to her aid while she was being attacked.

“Their actions not only helped save her from further injury, but assisted police in apprehending a violent offender.

“We hope today’s sentence offers a form of closure for her, now that her assailant is behind bars.”

Can you help find this man