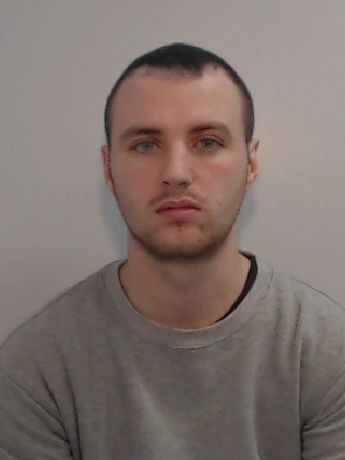 A motorcyclist who caused the death of a man and his friends who tried to cover it up have been sentenced.

Ryan Adshead,25, of Gladeside Road, Benchill, pleaded guilty to aggravated vehicle taking where a death is caused, causing death by careless driving, unlawful driving, and perverting the course of justice at an earlier hearing and was sentenced to six years and six months in prison.

His friends who tried to cover his crimes up were either jailed or were given suspended sentences for perverting the cause of justice.

The court was told that about 1.40pm on Friday 9 June 2015, two motorbikes travelling at high-speed on Rowlandsway were spotted by a PSCO. Adshead was riding one of the motorbikes.

At the same time, Jacinto Cabrera-Vargas, 67, was crossing Rowlandsway from near to the McDonalds, when he was hit by the motorbike being ridden by Adshead.
Adshead abandoned the bike immediately following the collision and fled on foot, leaving Mr Cabrera-Vargas on the floor seriously injured. Adshead left his bike at the scene and the other bike failed to stop.
Mr Cabrera was taken to Hospital where he later died of his injuries.
Adshead was later arrested on suspicion of dangerous driving, but the other motorbike was never traced.
During the investigation, officers spoke to Stacy and Paul Wood, who said that Adshead was at their house at the time of the collision, so could not have been the person riding the motorbike. This was later found to be untrue and they were both arrested on suspicion of perverting the course of justice. Adshead was also arrested for the same offence.
Stacey Wood 29, and Paul Wood 28, of Braintree Road, Wythenshawe pleaded guilty to perverting the course of justice. Stacey Wood received 12 months in prison, suspended for two years, and Paul Wood received 12 months in prison.

Sergeant Paul Hailwood, from Greater Manchester Police’s Serious Collision Investigation Unit, said. “This was a tragic set of circumstances in which a man lost his life. Not only was Adshead travelling at high-speed, but after he hit Mr Cabrera-Vargas, he fled the scene, leaving him injured in the road. His behaviour afterwards only served to highlight his selfishness and the lengths he would go to, to evade justice.

“Stacy and Paul then lied to police about where Adshead was, but their web of lies eventually unravelled.
“I hope today’s sentences beings some form of closure for Mr Cabrera-Vargas’s family, after what has been an extremely difficult time for them.”

Jacinto’s family have paid tribute to him: “After 22 months of fighting for justice for Jack we can finally close the door on what has been two of the most traumatic and stressful years of our lives, and begin to grieve a wonderful man, who we hope can now rest in peace.
“The sentence is, in our opinion, far too lenient for somebody who was driving a powerful motorbike without a license, fled the scene immediately, protested his innocence for 22 months, and generally showed no remorse for his actions, however we know that judges are restricted in the time they can give. For that reason, we join the many families who have sadly been in the same situation as we are now, in standing together and demanding that the law is revised surrounding deaths and injuries caused by motor vehicles. Cars and motorbikes are dangerous weapons when in the wrong hands and anybody who drives or rides one recklessly knows what the consequences may be.
“Jack was a very special man to us – he was a loving grandfather, father, brother, and uncle, and for him to be taken away so recklessly, when he was just on his way to an exhibition of his art, has been a very difficult burden to bear. We’ve missed every moment with him over the last two years and will continue to do so for the rest of our lives – we’re the ones who have got a life sentence.
“We have so many people we’d like to thank for helping us through this time, including: Greater Manchester Police, and especially PC Rae Willis, for their determination in not only investigating the case, but for their immeasurable support of our family also; and the Crown Prosecution Service for fighting for justice. We would also like to send our gratitude to the many members of the pubic who stayed with and cared for Jack in the immediate aftermath of the incident – it’s comforting to know that he wasn’t alone in his final moments – as well as the many witnesses who came forward and helped the police to put the case together. Thanks also to the staff at Salford Royal, who did everything they possibly could for Jack.

“No matter the sentence today, it would never have been enough, as no sentence could have undone the last two years, or brought Jack back, but we’re hoping that the end of this case can bring us some closure and that it might allow our dear dad, grandad, brother and uncle, to finally rest, which is what we want most of all.”