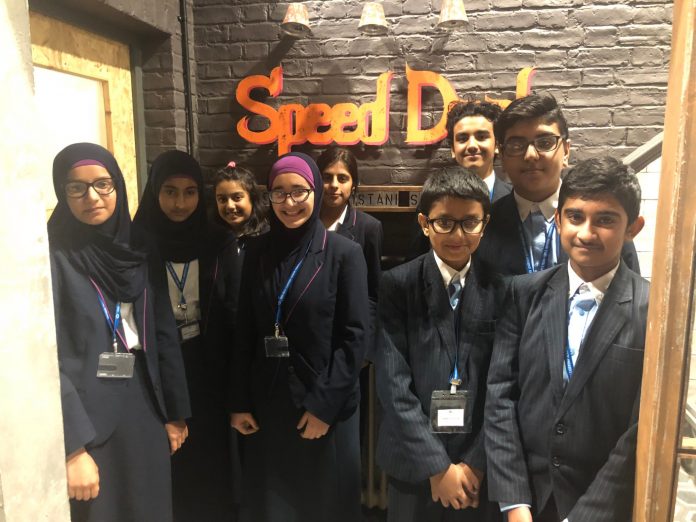 Nine young people from schools in Manchester have won a school’s script writing competition organised by SharpFutures, a social enterprise which helps young people into careers in the creative and digital sector. The competition was run in association with ITV Studios.

The students, aged 12 and 13 from the Eden Leadership Academies in Cheetham Hill, were selected following a rigorous judging process overseen by SharpFutures and members of the Coronation Street storylining team. They were asked to create a story line based on school life that included current teenage characters in the soap.

The script writing competition was set up by social enterprise SharpFutures who work with ITV to encourage people from ethnic minority groups to consider jobs in television.

ITV launched the competition following an event at The Sharp Project in March attended by 240 pupils from the Eden Schools.  The students got the chance to learn about the creative, tech and digital industries and to hear ITV’s head of HR, Trish Brady and crew and engagement manager, Tracy Nichols, share stories of their roles and careers in television.

Coronation Street story producer, Lindsay Williams from ITV said: “We were particularly keen to work with SharpFutures and the Eden schools to encourage students with Muslim faith and BME backgrounds to consider career options in television. We were incredibly impressed with the response to the workshop and the standard of writing it produced was fresh, competent and articulate. It was great to welcome the winners onto the set and be able to share more information about training and job opportunities in the industry.”

Head teacher at the Eden Girls Leadership Academy, Emma Louise Merva, said: “We’ve been working with SharpFutures since we set up the new schools in Cheetham Hill last year. We are committed to ensuring our pupils receive the broadest understanding of careers and opportunities available.  We know creative digital is a really strong, growing sector that is highly relevant to our young people. Careers in content making often aren’t as visible as some other more traditional professions and so enriched curriculum activities like this are key to providing our pupils with the careers information they need.”

CEO of SharpFutures Rose Marley commented: “The competition is part of an ongoing strategy to develop a ‘Talent Pipeline’ from diverse communities.  Over 80,000 people work in creative and digital businesses in Manchester. It’s one of the best places in the UK to work in film, TV, tech, gaming, content and design. There’s lots of opportunities and we’re keen to make sure people from all backgrounds know about them.”

Prime Minister to warn against outdated attitudes in higher education as review could end...