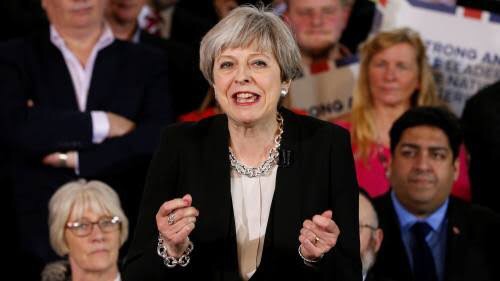 Whisked by helicopter fresh from securing a Parliamentary mandate to hold the snap General Election on the 8th June, Theresa May chose to kickstart the 2017 general election campaign in a parish church hall in Egerton.

“Now there’s a very clear choice at this election. It’s a choice between strong and stable leadership under the Conservatives, or weak and unstable coalition of chaos led by Jeremy Corbyn.” said Mrs May adding that:

“And that is very clear. Let’s look – the other parties are lining up to prop up Jeremy Corbyn. We’ve seen it with the Liberal Democrats, and we see it with Nicola Sturgeon’s Scottish nationalists. They’re very clear that they want to do everything they can to frustrate our Brexit negotiations. To undermine the job that we have to do, the task that lies ahead. Do everything to stop us from being able to take Britain forward. And it’s their tunnel vision focus on independence that actually provides uncertainty. They want to pull the strings, try to pull the strings of this election, prop up Jeremy Corbyn and provide more risk and uncertainty for the British people and that’s not in Britain’s interests.”

Warmsley Church Hall is in Sir David Crausby’s Bolton North East constituency, a seat that he has held since 1997 but with a diminishing majority and it will be where the PM will want to see an increase in the Tory vote if she expects to increase her parliamentary majority.

The neighbouring seat of Bolton West, currently held by Chris Green for the Tories is seen as a marginal constituency and will be watched closely as an indicator of whether Mrs May’s election gamble has paid off.

Most significant changes in UK air quality during lockdown have been in urban areas,...