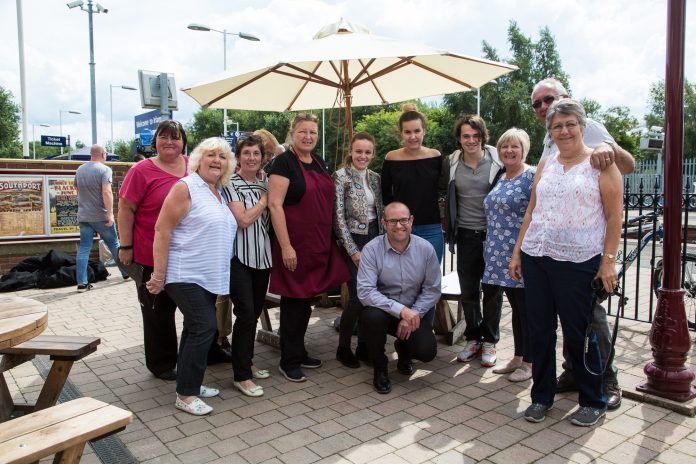 The limelight shone on Irlam Station in Salford when it starred in an episode of ITV’s Coronation Street on Monday (11 September).

Members of Irlam charity the Hamilton Davies Trust (HDT) and volunteers from FIRST (Friends of Irlam Station) also got into the act when they met Coronation Street stars Ellie Leach and Harry Visinoni during breaks in the filming.

Harry, who plays Seb Franklin, and Ellie, who plays Fay Windass, were starring in three scenes shot in the café bar, the underpass and on the platform while the station itself doubled up as a fictional stop called Mossford.

It is high praise indeed for the £2m transformation which lovingly restored the derelict station in 2015 into a café bar, heritage and community centre. HDT funded and led on the refurbishment project.

The original architectural features are now as good as new, while the many new facilities – including a modern, lively café bar called The Station – Irlam – feature fascinating heritage material and photographs, with new pieces of art everywhere.

The Station – Irlam café bar was closed to the public for the morning when the shoot took place in July. The cast relaxed in the café between takes and posed for selfies with local people, including HDT staff and FIRST members.

“We’re all thrilled that ITV chose to film Coronation Street at the new-look Irlam Station. It’s a fascinating, welcoming building and we are so proud of our role in transforming it.

“It is very exciting to think that millions of Coronation Street viewers will have seen the station on the TV. We hope this will encourage many more people to come and visit for themselves.“

Joanne Greenwood, Manager at The Station commented: “It was such a pleasure to have the team from ITV at the Station for the filming of Coronation Street, we would like to thank everyone involved with this project including our dedicated staff and the team from FIRST who worked tirelessly to ensure The Station was looking its best.

“It was exciting to see The Station on screen and we had lots of fun watching the film crew transform The Station into the fictional Mosford Station which starred on the show.”