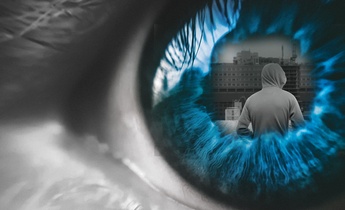 Off the Grid, an immersive new play for teenagers and adults by children’s theatre specialists Half Moon, comes to Waterside, Sale in Trafford on Tuesday 20 November, as part of a 11 venue UK tour.

Developed in partnership with young people, Off the Grid is an immersive new play by David Lane that navigates a shocking and heart breaking human story through the underbelly of a hidden society. It has direction by Chris Elwell, design by Verity Quinn and the composer is Guy Connelly. The story is told by two performers, Jesse Bateson and Bradley Connor.

Connor and Kelly are brother and sister. They share the same birthday, but ten years apart. Since the disappearance of their parents, when Kelly was three, they have been dependent on each other for survival. Connor is everything to Kelly: dad, brother, mum, friend – and storyteller. They’ve learned how important it is to believe in something fantastic when you’re living off the grid.

But what happens when you discover you’ve made the wrong decision? Forced to back down, do you sacrifice your beliefs in order to stay together? Follow Connor and Kelly over seven years and discover if their own tale is as hopeful as the fiction they’ve clung on to for their very existence.

Off the Grid is presented by Half Moon, the UK’s leading small-scale theatre company making work for young people, and follows on from What Once Was Ours in 2017, a co-production with Zest Theatre, that won the Off West End OFFIE Award for Best Production for Young People aged 13+.

Off the Grid is written by David Lane, one of the most exciting writers in the field of work aimed at teenage audiences, his previous work for Half Moon includes Free (2014) and Begin/End (2010).

David Lane commented: “Off the Grid is about two abandoned children: a brother who at thirteen makes an impossible promise to his three year old sister. He does this for the most genuine, humane and compassionate reasons, but doesn’t know it’s impossible when he makes it. By the time he realises, he knows that in breaking it he’ll destroy the only thing that has made their joint experience of a cruel world bearable. But without surrendering that thing, he can’t fulfil his own needs as a human being. Can he sacrifice his needs to maintain someone else’s happiness, and can he keep the biggest promise he’s ever made to the one person he’s vowed to protect?

David continues: “I wanted to write a sibling story, but through that to explore the role of a parent. What might happen if you shouldered a young person who had passion and creativity and hope with the responsibilities of being a parent – and how does that conflict with the huge self-discoveries that occur when you change so much between the ages of 13 and 20? What happens when the values that you’ve invested into creating a whole fictional world, for the benefit of somebody else’s protection, are no longer compatible with how you see yourself?”

Chris Elwell, the director of Off the Grid, commented: “Off the Grid is a compelling piece of new writing for young audiences that isn’t afraid to ask some difficult questions about surviving on the poverty line. The immersive style of the production means audiences will become an integral part of the heart breaking action and witness at close quarters the emotions’ of the characters as the struggle to survive over a decade of time.”

Aperitivo at Mamuicum – New Cocktail Hour in the City