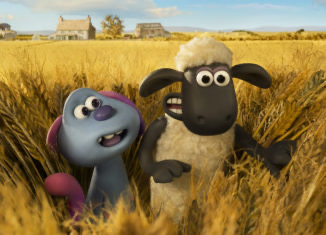 Shaun the Sheep’s second feature-length movie, A SHAUN THE SHEEP MOVIE: FARMAGEDDON takes the world’s favourite woolly hero and plunges him into an hilarious intergalactic adventure he will need to use all of his cheekiness and heart to work his way out of. When a visitor from beyond the stars – an impish and adorable alien called LU-LA – crash-lands near Mossy Bottom Farm, Shaun soon sees an opportunity for alien-powered fun and adventure, and sets off on a mission to shepherd LU-LA back to her home!
Our friends at www.TheJournalix.comcaught up with co-director Will Becher ahead of Friday’s nationwide release…
“Richard Starzak (director and creator of the Shaun series) has toyed with alien visitors a few times in past projects, so it wasn’t entirely new to the Shaun world. But this is a brand new story with an Alien called Lu-La (who’s name was devised from tasking the first two letters from the Lunar Lander). The film’s title Farmageddon was offered as a joke by (Wallace & Gromit creator) Nick Park, but we liked it so much it stuck.”
How much input did Nick Park have in the project?
“Nick watched the reel at various stages during production and gave notes and feedback. At Aardman we are surrounded by talented filmmakers and storytellers, like the company founders Pete and Dave, so my co-director (Richard Phelan) and I were grateful for their support.”
Before working at Aardman, Will wrote fan letters to the studio as a child…
“I never imagined those letters would lead to me animating with Nick Park, let alone co-directing Aardman’s latest feature film. I know it’s a cliché but it really is a dream job. It’s a challenge too – directing a film is the hardest thing I’ve ever done. But I’m so pleased to have had an opportunity.
I love stop motion, because you can reach out and touch everything. The most amazing thing about working on a film like this is seeing designs on paper turn into actual objects, locations and characters. And then watching as these inanimate objects are brought to life by our animators. Walking around these exquisitely detailed miniature worlds really takes some beating.”
Aardman are always good at the finer on-screen details. What can the audience look out for in this adventure?
“It always amazes me how resourceful and ingenious the crew are. The look of Farmageddon is really ambitious, we have never seen such expansive locations before. Shout out to our art director and team Matt Perry – there is a particularly cool secret underground base a la Bond layer. I would urge you to watch this film on the big screen to really enjoy those details, it’s a widescreen sci-fi spectacular!”
How did Will leave his own thumbprint in this film…?
“There are elements of Lula’s character inspired by my own kids (see supermarket scene) and elements of our lives in the situations the character’s go through. Somehow making it personal helps it to connect with a wider audience. So Rich, myself, Paul and the story team would often reference personal stories and situations looking for comedy.
But when it comes to thumbprints there are literally hundreds of talented people involved in making this film – so the creative touch is vast.”
Given our current political plight, Farmageddon is delightfully British. It’s not that bad a place is it?
“Britain has a huge amount to love about it – and I think this film celebrates both the big and the small things that make up our unique nation. The comedy in Shaun the Sheep feels very British, but somehow seems to translate across continents.”
And after covering football, pirates and outer space in recent years, what’s next up for Aardman?
“Lots of exciting new projects are already underway, but you’ll have to watch this space to find out what’s next… I’m off to have a lie down.”
Will Becher is bringing Shaun to Manchester for the Animation Festival taking place at HOME from 10-14 November 2019 – http://www.manchesteranimationfestival.co.uk