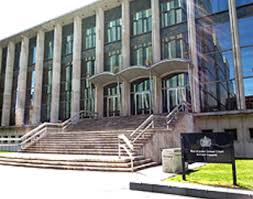 A 34 year old man from Hulme has been jailed for a number of drug related offences.

Nathan Doyle was sentenced at Manchester Crown Court yesterday to four and a half years in prison after the court heard how he had been importing and distributing drugs over a two year period.

On Friday 14 December 2015, the UK Borders Agency intercepted a consignment of drugs at Coventry Airport which had been sent from Toronto, Canada. The package was destined for Nathan Doyle at his home address and, when inspected by officers, was found to contain 16g (£800 value) of cocaine.

On Monday 19 September 2016, the UK Borders Agency again intercepted a consignment of drugs destined for Nathan Doyle, this time sent from Ontario, Canada. When examined, the consignment was found to contain 130g (value £1300) of cannabis.

A few months later, Doyle set-up a PO Box account so that he could have items sent to an address on Deansgate, Manchester.

On Wednesday 10 May 2017, the UK Borders Agency intercepted a second consignment of cannabis (value £1800) from Canada, this time bound for the Deansgate address

In June 2017, the Canadian Borders Agency intercepted a 140g consignment of cannabis (value £1400) bound for Doyle at his PO Box.

At the end of July 2017, a GMP officer visited the company where Doyle had set-up the PO Box address and learned how he had registered for the PO Box.

During the visit, the officer discovered that a parcel had just arrived for Doyle and it was seized. Upon opening the package under forensic conditions, it was found to contain 14 x 1g individual foil packages of the Class B controlled drug “shatter”- a highly potent form of THC cannabis oil.

Doyle was arrested on Monday 8 August 2017 on suspicion of Importing Class A and B controlled drugs.

When inside the address, officers found overwhelming evidence to suggest that Doyle had been importing packages from Canada containing cannabis. They also found evidence that the packages had been decanted into glass jars and that he had at one point, been extracting the THC oil from the herbal cannabis.

A large quantity of smell proof pouches, snap bags, jiffy bags and large letter stamps were also discovered, suggesting that Doyle was supplying the drugs in the same way that he is importing them.

Also found at the address was 500g (value £5000) of cannabis, a ready to grow magic mushroom kit – which had been imported from Amsterdam by Doyle – and a small jar of magic mushrooms.

After Doyle was interviewed, officers learned of another delivery that had recently arrived. Upon seizing and opening the package, it was found to contain a shrink wrapped, boxed spiral slicer. Inside the box officers found 2 x 250g (value £5000) foil pouches of herbal cannabis.

Detective Chief Inspector Terry Crompton, of GMP’s City of Manchester division, said: “Nathan Doyle thought he was above the law and beyond detection. During this operation we monitored him closely as he carried out his illegal activities from his home address and the city centre.

“I would like to thank the officers in this case, as it is thanks to all of their hard work that this man is behind bars.

“I hope this sentencing sends a clear message that we will relentlessly pursue those who import drugs and we go to great lengths to bring them to justice.”

Police find handgun and ammunition in a communal bin in Blackley