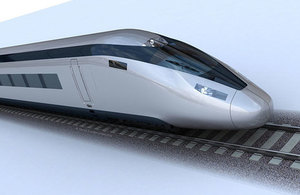 The Prime Minister Boris Johnson has confirmed that there will be an independent review into HS2 putting the future of the rail link into doubt.

Douglas Oakervee, who has built up considerable knowledge on a wide range of major projects over the course of his 60 year career, will lead the review and will work with Lord Berkeley as his deputy.

They will be supported by a panel of experts, bringing together a range of perspectives from business, academia and the transport sector to ensure an independent, thorough and objective assessment of the project. Panellists will each be consulted on the report’s conclusions.

Part of the scope of the review will be to see how its building will relate to the Northern Powerhouse Rail scheme which includes the East-West link.

A final report will be sent to the Secretary of State, with oversight from the Prime Minister and Chancellor of the Exchequer, by the autumn.

The report will inform the government’s decisions on next steps for the project. Limited, largely preparatory works, on the project will continue in parallel with the report’s work.

The Prime Minister has been clear that transport infrastructure has the potential to drive economic growth, redistribute opportunity and support towns and cities across the UK, but that investments must be subject to continuous assessment of their costs and benefits.

Phase 1 of HS2 between London and Birmingham is due to open at the end of 2026, with a second phase to Leeds and Manchester scheduled for completion by 2032-33.

The Mayor of Greater Manchester, Andy Burnham, said: “The North is struggling to cope with our Victorian railway infrastructure and major upgrades are long overdue. HS2 and Northern Powerhouse Rail will need to last us as long as the Victorian rail infrastructure it replaces, so it is essential that we get it right.

“While I am not opposed to looking at how we can ensure HS2 delivers value for money, people in the North will be wary of this review. There is no elected representative from the North on the review team and, too often, Government promises to the North have proved to be about as reliable as our trains. If we are not careful, this review could add uncertainty and confusion just when the North needs clarity.

“That said, I am very encouraged by the suggestion that the crucial east – west link across the North, which HS2 enables, could be prioritised over southern sections of the line. I will work with the review team to explore that possibility.

“Both HS2 and Northern Powerhouse Rail are vital if we are to truly rebalance our country’s economy.  We need a modern, high speed, rail system, like France or Germany, that connects all parts of the country and is fit for the 21st century.

“It feels like we are at a critical moment when the government’s commitment to the North is about to be tested. People here are watching closely and will demand nothing less than the Northern Powerhouse that was promised.”

The High Speed 2 line to Manchester will be a vital part of rebalancing the UK economy and creating better transport links to, from and across the North.
“It is imperative that both HS2 and Northern Powerhouse Rail are delivered as quickly as possible and connected by a hub station at Manchester Airport to realise the full economic potential of both schemes.
“Connecting the country more effectively, both North-South and East-West, would drive economic growth across the UK, and do the most to rebalance our economy.
“MAG would like see work on the northern leg of HS2 accelerated – and delivered in tandem with Northern Powerhouse Rail – to allow the benefits of better connectivity in the North to be felt much sooner.
“We look forward to welcoming Douglas Oakervee and the review team to Manchester Airport to further discuss these issues.”

Former Lord Mayor is deselected as council candidate in Burnage