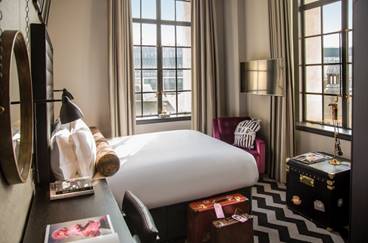 Manchester’s Hotel Gotham has been named the ‘Coolest Non-London Venue’ at the 2018 COOL Venue Awards, adding a 15th industry honour to its fast-growing collection. Having previously picked up the prize for ‘Coolest Boutique Hotel’ at the 2016 awards, the business leads the charge for the city of Manchester, as its reputation and influence as an economic hub continues to grow.

The award sees Hotel Gotham go another year with industry honours, having been widely recognised across the hospitality and tourism industries since its launch in April 2015. Named Best Boutique Hotel at the 2017 Manchester Awards, Best Luxury Hotel at the 2017 Best Stay Awards, as well as one of the Top 100 British Hotels by the Sunday Times, the King Street property has continued to enjoy an outstanding reputation with both guests and reviewers alike, boasting over 90% average occupancy, with five-star certification and Two Rosettes awarded by the AA.

“Myself and the entire Gotham team are over the moon to have won our second Cool Venue Award”, commented General Manager, Mario Ovsenjak. “The organisers have been extremely supportive of the business since we launched three years ago, and it is a great honour to have been positioned at the forefront of the booming economic scene here in Manchester.”

“The aim with Hotel Gotham was to offer an attractive and glamorous alternative to London”, said Graham Marskell, Managing Director of Operations for Bespoke Hotels. “In this regard, we are delighted to be honoured in this way and positioned at the forefront of Manchester’s ongoing emergence as a ‘Northern Powerhouse’.”

“The timing of the award couldn’t be better”, added Robin Sheppard, Chairman of Bespoke Hotels. “We hope shortly to announce the location of the next Hotel Gotham, and this latest recognition is the perfect way with which to introduce an exciting sequel.”

Find your perfect venue at Corn Exchange this Valentine’s Day