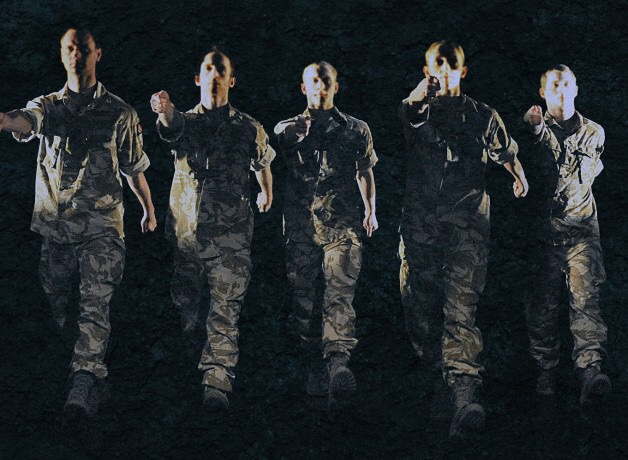 A thought-provoking and moving site-specific show is coming to a unique venue of an army reserve barracks in inner-city Manchester.

Two performances of 5 Soldiers, presented by the Rosie Kay Dance Company, will be performed at Rusholme Army Reserve Centre on Fri 29 and Sat 30 May 2015.

The production will run at the same time as its opening production, The Funfair, in its brand new home at First Street in Manchester city centre.

For this tour, the dancers devoted a week of their demanding six-week rehearsal schedule living and working as full-time soldiers on a military exercise with The 4th Battalion, The Rifles – first on Salisbury Plain and then in a mock Afghan village in Norfolk for a three-day battle training exercise, including two nights sleeping under tarpaulin.

Even in today’s technological age, when warfare can be overseen on a computer screen, war makes unique demands on the body. Exploring the physical effects of combat and war, 5 SOLDIERS is a timely, controversial, and poignant exploration of war in the early 21st century, which demonstrates in visceral style how soldiers are made and how war affects them.

“Despite advances in technologies of war and the treatment of war injuries, many people are going to be dealing with the impact of our long stretch of operations,” explains Rosie Kay. “This affects not just soldiers, but their families, their friends and it affects us as a society. We know 5 Soldiers really resonates with serving and former soldiers, and one of the aims of the tour is to make people see conflict and the repercussions of war in a new way.”

“Following an adventurous 2014 where we performed in a derelict pub and in the Victoria Baths, I am delighted that we retain our exploration of our city in Home’s upcoming season,” says Walter Meierjohann, Home’s Artistic Director: Theatre.

“I have collaborated with the Rosie Kay Dance previously and I am delighted to invite them to Manchester. Their use of the body to tell tough, uncompromising stories is one to be admired. 5 soldiers is a stark look at the soldier in today’s world where the physical and mental strains on our troops is reaching unprecedented highs. To see this work in the context of the Rusholme Army Reserve Centre makes for a very exciting start to our season.”

General Sir Nick Parker, the former Commander-in-Chief of UK Land Forces, adds: “Rosie Kay’s use of dance to help create a complex and nuanced picture of conflict is one of the most innovative and compelling initiatives that I have experienced in the aftermath of Iraq and Afghanistan. It demonstrates how art can be used as a powerful tool in the healing process, and is an extraordinary achievement which will make a difference to many people.”