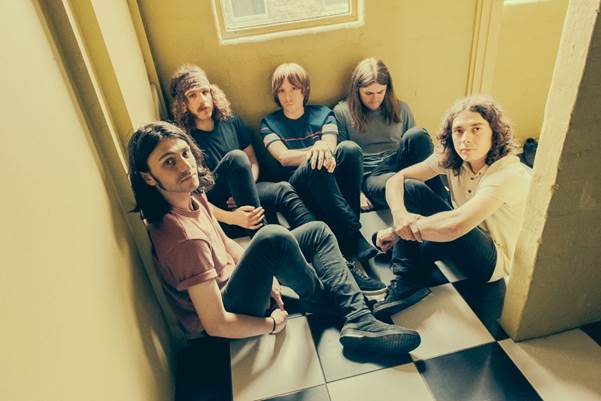 Psychedelic risers The Vryll Society share the video for their swirling new pop effort Light At The Edge Of The World, offering further proof of their genre-bending versatility ahead of the imminent release of their debut album.

Combining the influences of Tame Impala and Stereolab, the emerging quintet delve deeper into their eclectic palette of space rock, trip hop and psychedelia on their latest single with director Peter Fearon adding his own unique interpretation within the visuals.

“For the video we wanted the idea of a girl listening to the track and falling into a dream”, the band stated. “The majority of it is shot in a country garden where Peter really enhanced the colours to give it a dreamy summery vibe. The girl seems to be looking for something throughout the video and we’ve left it up to the viewer to decide what that is”.

Having already produced a series of critically acclaimed singles, including live stalwarts ‘A Perfect Rhythm’ and ‘Shadow Of A Wave’, the fast-rising Merseyside outfit are primed for their first full-length release, with impressive appearances at the likes of Glastonbury, Reading & Leeds and TRNSMT helping them develop a staunch grassroots following.

Extensive support from BBC Introducing has arrived in the form of slots at their SXSW and Glastonbury showcases alongside a Maida Vale live session over the past 18 months, whilst widespread acclaim from Huw Stephens (BBC Radio 1), Phil Taggart (BBC Radio 1) and Steve Lamacq (BBC 6 Music) has seen the spotlight on the psych-pop quintet intensify, leading to supports with Blossoms, The Coral and The Kooks.

Produced and engineered by Joe Fearon and Tom Longworth (Parr Street Studios, Liverpool), The Vryll Society’s Course Of The Satellite is released on 10th August via Deltasonic Records.

They play Manchester’s Soup Kitchen on the 16th October

Marc Almond at the Bridgewater Hall