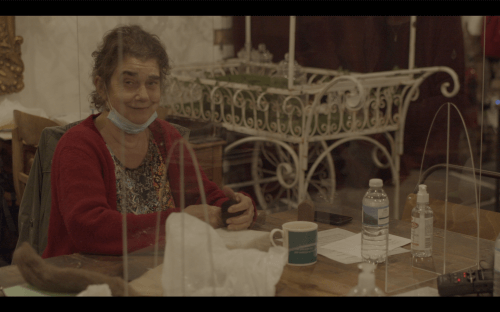 A film premiere at HOME, Manchester, on Wednesday 30 June, explores the role of the arts in recovery from substance use. It will be launched by Greater Manchester Mayor Andy Burnham.

Artist and filmmaker Ben Green followed a group of people in recovery from substance use as they took part in a series of artist-led creative sessions, from working in wood and sculpture through discarded rubbish, to textiles and filmmaking.

Called Sounds at the Edges, the film was commissioned by Manchester-based arts and recovery organisation Portraits of Recovery (PORe).

The film follows nine people from Greater Manchester as they learn new skills, explore their creativity and for some, enjoy their first cultural experiences in more than a year.

The journeys of three Greater Manchester women feature prominently in the film. Janelle, in her 40s, from Stretford, can be seen to flourish as the project progresses, increasing in confidence and starting to apply for jobs.

Annie, in her 60s, and from Longsight has previously held several high-level positions. She talks about the impact of retirement on her life, discovering her creative self and decides by the end of the project that she wants to get back into volunteering.

And as the project nears its end, Anastasia, in her 50s, and from Baguley, proclaims that she is going to apply for an art foundation course.

The socially distanced sessions, part of a project also called Sounds at the Edges, ran from April-June 2021. The project was initially due to take place in 2020 but was delayed for a year by the pandemic. Funded by the Greater Manchester ESF Community Grant Programme the project supported work preparedness for future employability.

Artists from across Greater Manchester, including Ben Green, Jenny Walker, Freya Goodwin, Oliver East, James Ackerley and Claire Tindale each held a weekly session with participants, introducing them to a range of high-quality artistic experiences.

Covid-19 has hit those dealing with addiction hard. A September 2020 study conducted by the Royal College of Psychiatrists found that 8.4 million people’s drinking habits were classified as “high risk”, up from 4.8 million in February. Both the National Drug Treatment Monitoring System and Alcoholics Anonymous have reported a dramatic increase in enquiries from those seeking help for their substance use issues over the past year.

Ben Green said: “During the time I was with the Sounds at the Edges group, I found myself captivated by the creative openness, good humour and honest insights from those on the course, and I hope that the final product offers up a record of this.

“The film is composed of observations from the sessions, alongside testimony and images contributed by the participants themselves. It is my aim for this collaborative process, while made more challenging by Covid-19 restrictions, to speak not just to my experience within the sessions as an observer, but to the collective experience of all involved.”

Jenny Walker, creative producer, Sounds at the Edges said: “This is an experimental approach to storytelling.

“We hope that the film screening will serve as a public and cultural platform to bring people together – challenging stigmas around recovery through the sharing of authentic voices and personal journeys.”

Mark Prest, founder, Portraits of Recovery, said: “We commissioned this film to amplify the voices of people who are frequently talked about, little heard by the rest of society.

“This project supported participants to develop new skills and create art that looks at their recovery and how this helps in transforming their identity.

“Key themes exposed by the work include identity, judgement and what we chose to conceal or disclose about ourselves.”

The film will be screened at HOME, Manchester, on Wednesday 30 June, at 12:15pm.

Only 30 tickets are available (free) and they must be reserved on Eventbrite: https://www.eventbrite.co.uk/e/sounds-at-the-edges-film-premiere-tickets-158713146293

How to Avoid Serious Accidents in the Home